In January my boyfriend and I were up really late and we went outside to have a cigarette. When we went outside I looked across the field and saw a large glowing dome. I pointed it out to my boyfriend and we were both in awe. We have no idea what else it could have been. It was so unbelievably bright. The entire surface of it was one solid white-orange-yellow color and seemed to be casting light, but there was no glow on the snow around it. It looked like it was about 700-800 feet away from us and it was large, if I had to guess I would say 8-10 feet wide at the base. I assume it was a sphere shape that appeared as a dome because the object was on the ground. We watched it for a minute or two just trying to figure out what it was, and by the time we decided it wasn’t normal and I ran to get my camera it started to fade away. It didn’t fly away or move at all, the light just slowly dissipated until it was completely gone. NOTE: The above image is CGI. 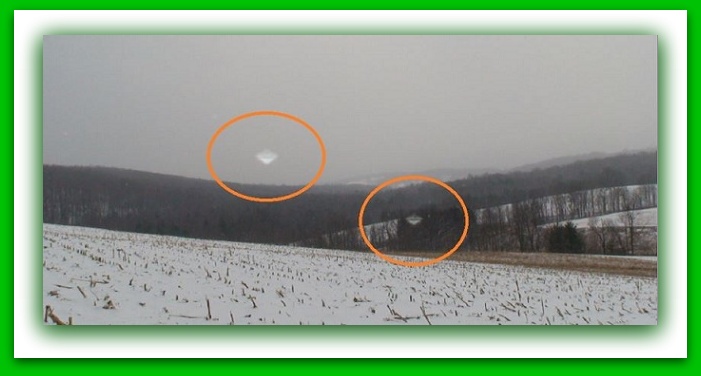 LANDING ALIEN CRAFT AND MISSING TIME IN NEW YORK
.
JULY 1981   ……………  CUDDEBACKVILLE NEW YORK
.
My boyfriend had a campsite near the Neversink River, in Cuddebackville, NY. My brother , my boyfriend, and I were returning home late one night  after a weekend there. My boyfriend was driving his Toyota Land Cruiser with the roof and doors off. The area was very rural and heavily wooded on both sides of the two lane road, with the river to our right. At one point, my boyfriend braked suddenly and stopped the jeep without pulling over. He jumped out of the vehicle and as I turned to look at him, I could see in the far back left corner of a field (to the left of our jeep) an illuminated silver craft. It was approximately 200 – 300 ft away from us. The field was slightly inclined, with a forest just behind it. There was a mountain beyond the forest. Barbed wire fencing and a stone wall ran along its perImeter. As soon as I realized that my boyfriend was going toward the craft, I screamed at him to not go near it! I was instantly terrified and feared for our lives!!! I ran from the jeep, leaving my brother sitting in the back seat, and headed down the road in front of us, screaming for help. I finally came up to a house on the right side of the road. There were no lights on inside or out. I banged on the door. Without anyone turning a light on, coming to the door, or peeking out of a window, I heard a man’s voice say, “It’s just the kids!” Instantly, I heard 2 – 3 young children giggling from somewhere outside. I do not remember walking/running back to the jeep, however the next memory I have is of standing next to the craft. If my brother were looking up toward us from the jeep, he would have seen me standing to the leftside of the craft. I could sense someone standing behind me and believe it was my boyfriend. I remember being amazed at how the surface of the craft seemed “lit up” as if something above us was shining a light down on it, but the surface didn’t appear to be reflecting light. I do not remember looking up to see if there WAS something up there. The immediate area around the craft was illuminated as well, but the light did not reach out beyond a few inches or so. It was as though the craft’s surface was emitting some sort of diffused light. There were a series of multiple lights (the size of grapefruits – maybe a tad larger) around the middle circumference of the craft. They were different colors. I could not see over the craft, (I am 5.9ft), but it wasn’t much higher than me – maybe a foot or two. I do not remember walking around the craft, but I feel as though it may have been @ 20 – 25ft in circumference. Nor do I feel as though I knew or was thinking about how it was the prank of “the kids” as I stood next to it. I was amazed this craft, but no longer terrified. I have no other memory of the event – I do not recall walking back to the jeep, driving home, being home, or talking about what had happened!! My boyfriend and I broke up soon afterwards. I have asked my brother several times about that night over the years, and to this day…I can not remember what he tells me, which I find unnerving. That night has been bothering me for over 30 years. Was it just kids playing around? Why can’t I remember laughing along with them or at myself for being so gullible? Why are my memories so fragmented?  NOTE:  The above image is a rendering.
.
KEN PFEIFER WORLD UFO PHOTOS AND NEWS
WWW.WORLDUFOPHOTOSANDNEWS.ORG
WWW.WORLDUFOPHOTOS.ORG
THANKS TO WWW.MUFON.COM CASE FILES
.
.
.