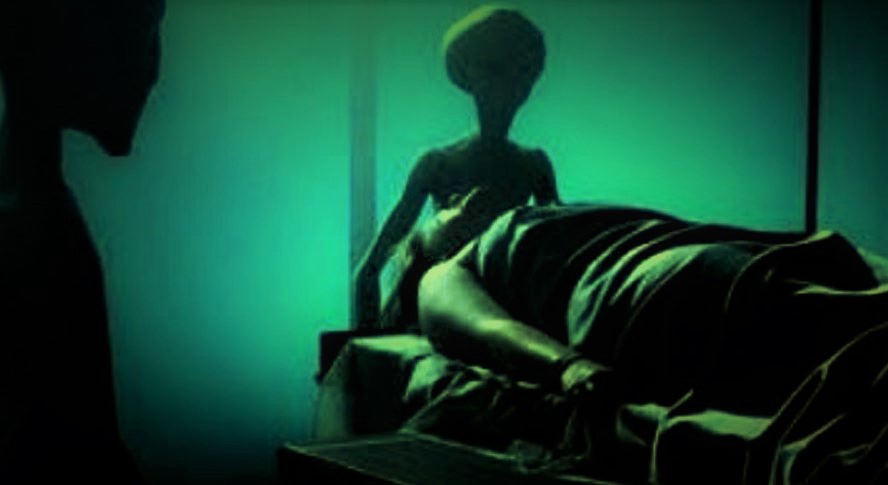 I’m 38 years old and have been abducted 3 times (that I can at least remember). It started when I was 12 years old. I was in my bedroom star-gazing out of my window in Arlington, Texas at around 11:15 p.m. on November 22, 1992. I saw a light moving in the night sky that moved slowly south. It was not blinking and was like a hazy ball of white light. It would stop and go frequently and move in one direction then disappear and reappear going in another direction. I noticed it getting brighter as if it were getting closer to me. All of a sudden it stops and a beam of light comes straight at me. I fall back off of the table I was sitting on and I can’t see anything but white. My eyes were blurred and couldn’t see anything but light. I got cold and felt like I was floating.

Then I am all of a sudden in the presence of 3 beings and I’m laying on a metallic table. The beings were short and skinny with long arms. Their heads were elongated and their bodies were like a pale human with tinted skin of grey and had a texture of scales on their body and wrinkles on their face, especially near their eyes. Their eyes were slanted and large black shiny eyes. When they blinked, their eyelids were transparent like a reptile, almost clear. They had a small mouth and almost like a frown. I felt as if I was in a trance state. I could move but was too scared to, so I laid there and looked down at the straps holding my arms and legs. It looked like a type of flexible metal, but soft. They poked me with a needle that came down from the ceiling and a monitor was floating around me and I could see myself on the monitor. Like a floating TV going all around my body. I began to scream and the older one looked at me and spoke to me through my mind in a robotic-like human voice and told me I have nothing to worry about. All of a sudden I looked at him and thought what do you want, he responded we are here to help you. We are of many and we are one of the same. I asked “what do you mean we are the same” he looked at the other two beings and then the other smaller being said in a female robotic-like voice “we protect your race from others who want to harm you”. I then kept asking questions and they began to ignore me. They put a film of clear soft silk-like material over my face and I don’t remember anything after that. I woke up in my bedroom on the floor and wobbled my way to the window and they were gone. I looked at my clock and it was 11:34 p.m. it had only been 19 minutes but it felt like hours had gone by.

Throughout the years I have had multiple abductions and it’s just not something you go telling people without getting a weird look. Back in 2012 I began a blog online and explained many of my experiences and my computer would constantly crash and my computer even caught fire during a live chat with another person while talking about our experiences online. It began to make me nervous to go online researching things like this. I feel as if I’m being watched by our government. Through many of my abductions I have learned that the government is working hand-in-hand with them and it is bigger than I realize. There is something going on which I believe is a new form of genetic transformation of the human race. – JJ   NOTE: The above image is CGI.

I was leaving my daughters home in Washington D.C. to go to Reagan International Airport to catch my plane. It was between 7 or 8 a.m., right before Thanksgiving 2017. I had just visited my daughter and cared for my grandson because he had the flu and his Dad had taken his mom on a trip to China because my daughter had to work. So my Son- In- Law, me and his mom we’re walking out to his car parked in the back because she was leaving for NYC the same day I was going home too. As he was putting the luggage in the car I happened to hear a jet approaching and looked up because you never know what kind of flyer you will see going over D.C. Before I spotted the jet, which I could here clearly, I see the metal object just hovering above us, pretty high up, not making a sound. I can’t tell what it is because it’s silent and it seemed to be changing or like morphing but it seemed solid. Coming in from my right is the jet I heard clearly, even though it was alot higher up than the other craft. I didn’t say anything to my Son-In-Law or his mom because he would have made me feel like a kook and his mother wouldn’t have a clue. So I start taking as many pictures as I can before I have to get in the car. My Son-In-Law prides himself on his knowledge of anything the flies so when I showed him the pictures I took and since he knows his backyard assumed it had to be a helicopter. But if it was where he thought it was, it would had been so loud he would have noticed at the time. In the last picture I took you can see the jet coming into frame and the top far right. You can judge the size when the jet appears. I was hoping you guys could be able to zoom in better than I could to tell what it is. I have had many experiences with UFO’s and it’s usually with people who are the biggest skeptics. I am very close, as the bird flies) to the Wright-Patterson Air Force base. I would be very interested in what you think I caught on camera.