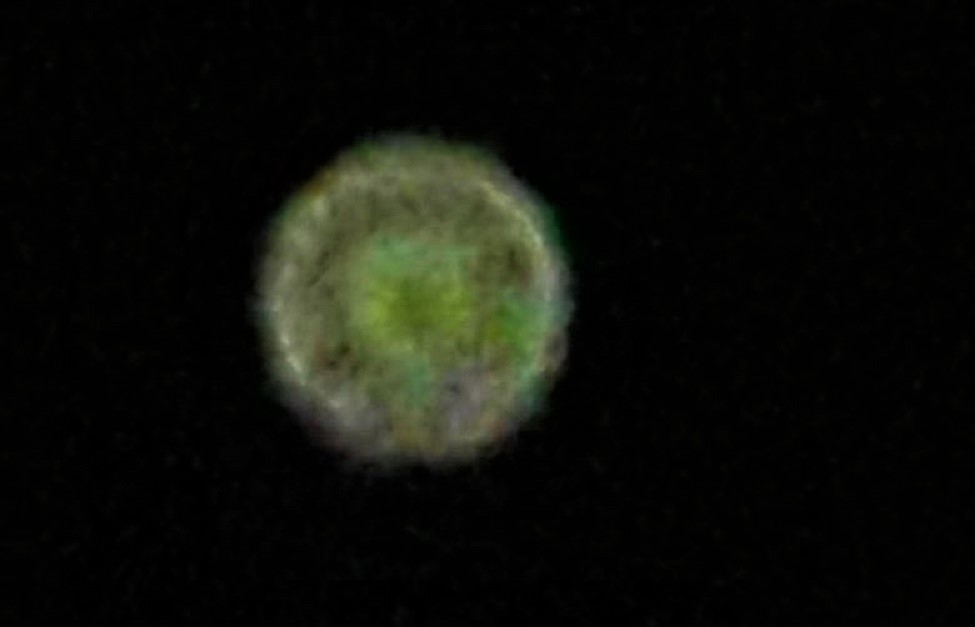 Near preston Idaho 8/7/18 836pm We were headed back from maple groves hotsprings when I was falling asleep and my long term partner got extremely excited about the sky. It was us two adults and 4 children. We saw this object in the clouds so we pulled over. It was around (moon was more south) it was round with lights downwards off of it.it wasn’t moving. It looked white but in photo it looked green Nothing would show up and video and I only got one picture that actually showed. I felt calm during watching it but got the hyper energy after. We all seemed to have a hyper energy after. The object was still in same spot when we left.we had to leave due to having kids with wet hair and it getting late. 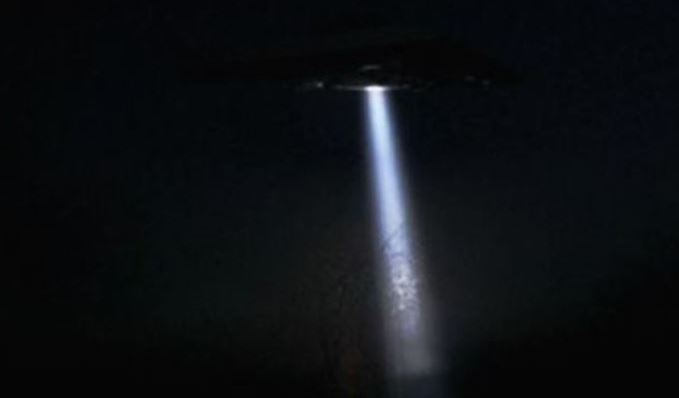 My wife and I were driving home on a well traveled road. My wife was talking on the phone when I noticed what looked like a plane’s powerful head light flying low in an uncommon direction. It wasn’t in a usual flight path heading to any airport. I was driving east and the object was flying south so we would have intersected within a 30 seconds. I slow down just before it crossed my path. It stopped about 50′ – 100′ feet above the tree tops and about 100+ yards from the road. I had started to slowed down a lot to see what it was, then I pulled over to get a better look. My wife asked me what I was doing, and I told her I saw an object hovering above the trees. Excited, She yelled out if it was a UFO as I got out of the car. I told her what looked like, and it could be a UFO. I ran back about 200 feet and for a moment I saw a diamond shape craft with white & red lights at each corner and a powerful central light “beam like” pointing downward. Within seconds the lights went off and it “seemed” to vanished. The structure of the craft was obscured due to it being a flat black color, but you could see a basic structural diamond shape. Once the lights went off you could not see or hear anything. I was excited because it had been years since I had seen one that close. When I was a kid (10-12) a friend (15-16) and I saw one that had landed on the beach (low tide)in Saco, Maine at dusk. It was witnessed by many people. That one was clearly visible in shape with great detail. I have never forgotten it. A couple of years ago felt compelled to submit it your organization along with a detailed drawing. I called our friends whom we had visited earlier to tell them what I saw. I did not call anyone else. My wife was using my phone or I would have taken a picture of it.  NOTE: The above image is CGI. 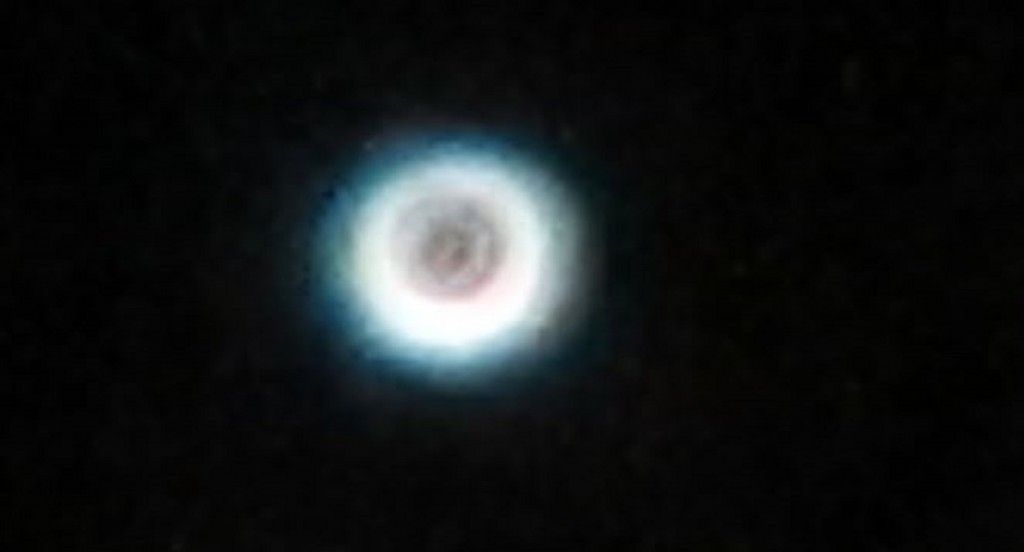 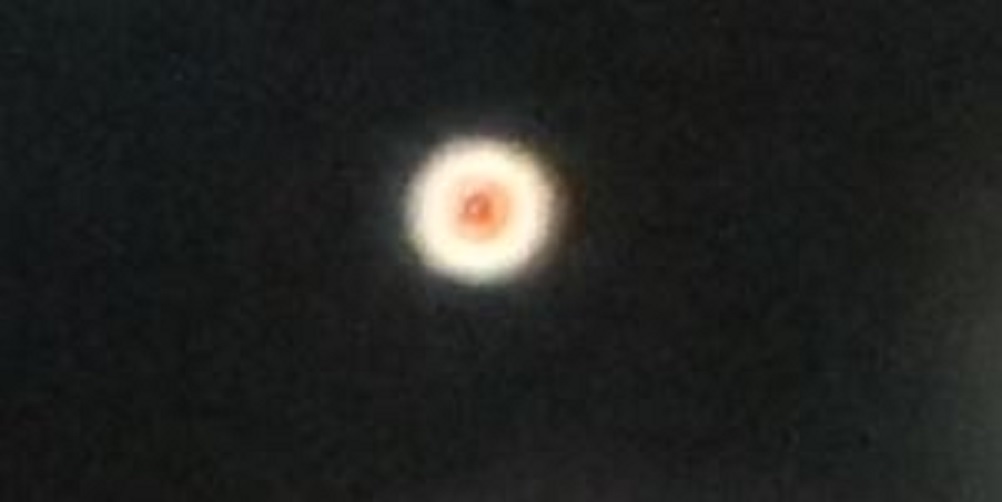 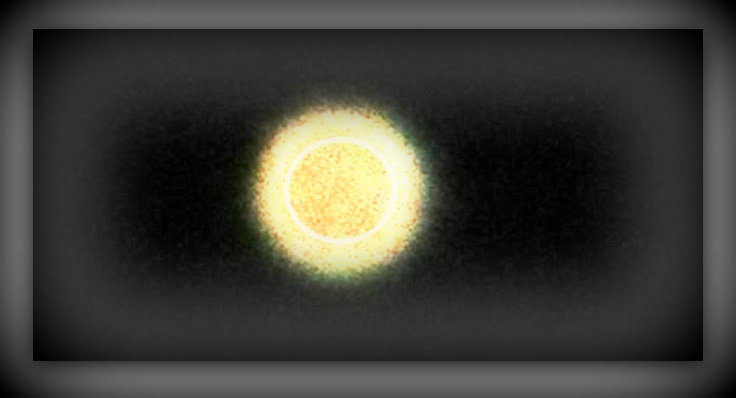 MYSTERIOUS LIGHT SPOTTED OVER THE NEW JERSEY PINELANDS
.
OCTOBER 7, 2015  …………  MANCHESTER NEW JERSEY
.
3:00 AM. My home has an enclosed back porch. It is not a flimsy structure. There is a window in the door that goes out to my concrete patio. The atmospheric conditions were as clear as possible. Due to my home being located in a very rural section of Western Ocean County, NJ – In the NJ Pine Barrens. There is a 15,000 acre Protected NJ Game Reserve twenty feet from my back door of my enclosed porch. The edge of said game reserve is within view of the windows within my enclosed porch. I first noticed above the tree line the crescent Moon in the early morning sky. I then looked to my right above the tree line. I have looked out from that same exact location on hundreds of occasions. Over the course of the approaching two years since I moved into my current home. This part of Western Ocean County, NJ is extremely rural. One of the very few location’s within NJ where ambient light does not impede the ability to see the night sky in an unexpectedly very clear manner. When I noticed what I believed to be what appeared to be a star as bright as the planet Venus in the night sky. I had never before ever observed a star like object in this area above the pine forest tree line. Based on the prior perspective & capabilities I have previously experienced. Within eight seconds of noticing this “new star”. It started to move at lightening fast speed diagonally on a sharp angle. Having dropped below the tree line. It was very difficult to see due to the density of the forest.
.
Though, due to it’s extreme brightness, I was still able to make it out through the pine tree’s in the forest. It remained there for less than twenty seconds. Once again, at an amazing observation of lightning fast speed. This star like appearing very bright object. Soared above the tree line by what appeared to me to be an ascent of six hundred feet within less than three seconds! As I continued observing this very bright star looking like object. It continued moving up & down at truly such fast speed that it could not have been a drone or any type of manufactured airborne object from the planet Earth. I watched it moving in a manner that was not consistent with anything that I had any ability to explain. It varied from very precise right & also left angle trajectory flight. Once again, all movement that I saw were all occurring at lightening fast speed and beyond that specific description of truly jaw dropping speed in sync with perfect avionics. The kind of super accurate movement and motions that were unlike any traditional aircraft I had ever observed, prior to this specific event. I did not have the ability to accurately know how large this object, AKA UFO was/is. Beyond it maintaining it’s consistent brightness. It was not pulsating. It was not changing it’s size or the amount of star like bright white light that I was observing from what I in a conjectured manner of thought. Possibly believed that this object was anywhere from twenty miles away from my home. Upwards of it very possibly being hundred’s of miles away from my home location. If it was very far away. That caused me to wonder about what the true and accurate size of this, not of this Earth, flying object truly and honestly was. I do not own a telescope. I own a pair of high power binoculars. I did not want to search for them in the main part of my home. With great concern that if I stopped intently observing this most unexplained flying marvel in the early morning sky above  at 3:00 AM EDT until 3:25 AM EDT.
.
Everything that I have communicated above was done so in an ethical and honest manner. I did not add or exaggerate anything relative to my honest observation that I have shared above. I would love to know exactly what it was that I was actually observing. FYI: My home is a fifteen minute drive from the town of Lakehurst, NJ ( I do not know the zip code there ). There is a very large US Naval Base located in Lakehurst, NJ. Most people I know locally believe that this specific US Military Naval Base has Nuclear Weapons located on its very large base. When the local & State Wide NJ Press has inquired as to whether or not this US Naval Base does or does not have Nuclear Weapons on it’s grounds or within it’s large & multi-faceted infrastructure. The official spokespeople from this US Military Facility have consistently responded with the answer: “NO COMMENT”. I’ve read & heard in the recent past, that UFO’s are frequently attracted to military facilities that contain nuclear weapon’s. Possibly that’s was why the specific UFO sighting I observed. Very may well have been within the specific area that I have just related. Beyond my original accurate described observation. Which is now being honestly shared & reported here.  NOTE: The above image is a rendering.
.
This case is under investigation by Ken Pfeifer Chief Investigator for MUFON New Jersey.
.
KEN PFEIFER WORLD UFO PHOTOS AND NEWS
WWW.WORLDUFOPHOTOSANDNEWS.ORG
WWW.WORDUFOPHOTOS.ORG
THANKS TO WWW.MUFON.COM CASE FILES
.
.
.