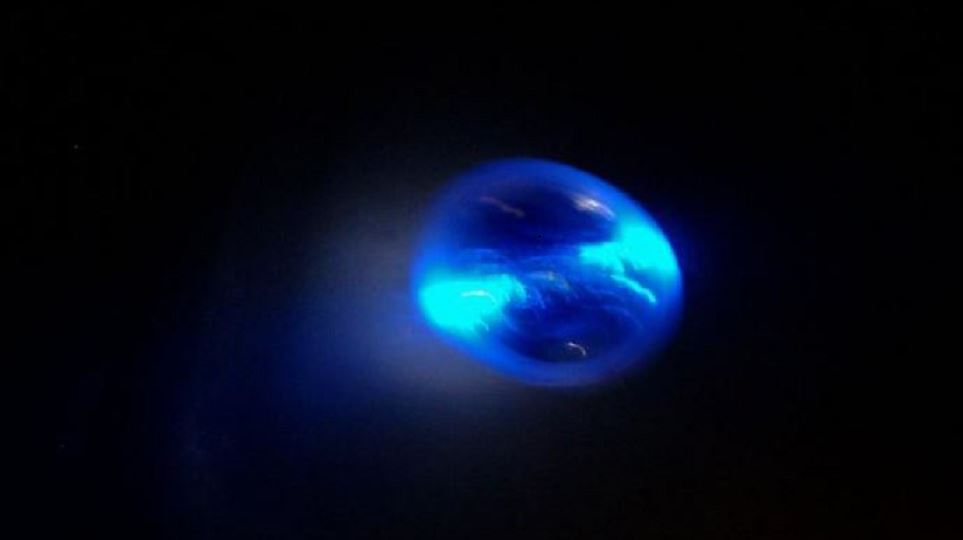 Braunig Lake, Bexar County, Texas, USA “Back in ’89, my brother and I were fishing in our boat at Braunig Lake in south Bexar County, Texas. The radio was saying something is in the sky in the southeast. We looked southeast and saw nothing. About 30 minutes later my brother goes there it is. It was right there by the power plant and like all of the workers were out on the cat walks watching it. One guy had a VCR camera filming it. The thing was 200 feet maybe more across and was a blue ball with white swirls on it like clouds. It was there so long that the workers went back in and we quit looking too. An F-15 came from Randoff AFB and got about 1/2 mile from it and it left – went out of the atmosphere around Casterville in about 4 seconds with out making a sound – UFO. If the Fighter would have fired at it with his Stingers it could have flew circles around them. Do not believe me, there was alot of witnesses, it was on the news that night but their photo was from town and was just a ball of light. My brother and I should have started up the boat and got closer. We were at the dividing jetties at the end of it. It was at left of the gas tower and only the height of the building. We talked our self into it was a big balloon until it took off. The fighter was I think an F-15. It had 4 stingers on it. It against the UFO would be like racing a modern car against a horse and buggy. It moved in 4 seconds from the lake to out of the atmosphere. Taking the highway its about 35 miles, but it traveled a straight bee line – not a peep out of it. It did not make sonic boom and the guy with the camcorder had went back to work when it took off.” jimmy Wilkinson   NOTE: The above image is CGI.