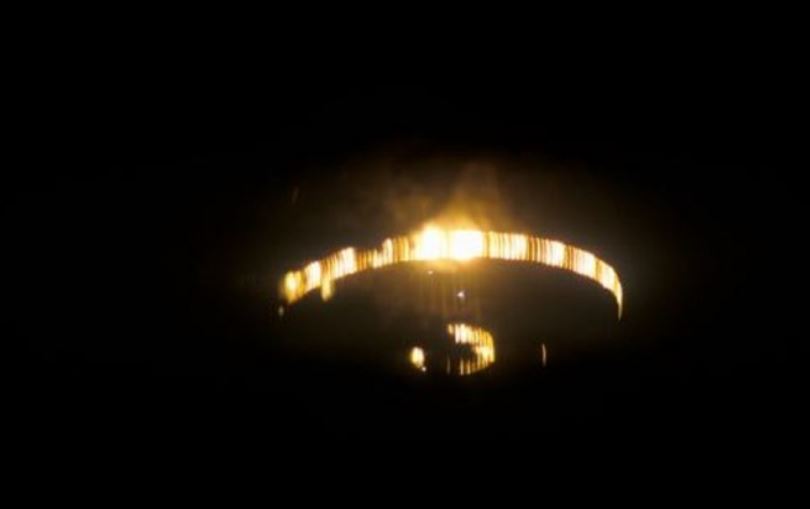 Myself and three friends were standing up the Blackhill Viewpoint, Lanark, Scotland, gazing into the skies when all of a sudden two piercing lights appeared in the skies to the north of us, they were not beside each other one was much further ahead than the other. They began to move in abnormal ways which made it abundantly clear that this couldn’t be a plane or a helicopter as it moved side to side and up and down far to quick that it almost defied gravity. The first “craft” moved in its flight path and as it came in our eye sight, it was clear that this was abnormal, however, still being the sceptic, I didn’t think anything as the sound generated did sound like a plane, although impossible. As the first craft passed, the second then began to move in the distance following the exact same flight path. Its movement was peculiar as it moved in a flight motion then shot forward but continued in the first crafts flight path and once passed, a third one became visible in the distance again. I know this sounds crazy and honestly I cant find the words to describe it, it left me speechless. Behind the third craft it honestly looked like there was a mothership or something much bigger. This could be because I was caught up in the moment and wanted to believe that this mothership was behind it but back to the third craft. This one was the banker, it closed my mind, I seen a ufo. Its flickered and followed the flight path as the other two but all of a sudden, it was in our eyesight, flying towards us. How it changed direction that quick is unknown as it is not as if I noticed it changed direction, it was just there. As it got closer, the lights flashed front then back, side then side, as if in a cross. The sound generated for something just touching cloud level was impressive, take a plane in the skies, all that way up, it sounded like that but this low down. Now as it went over us, it was clear it was of a circular motion. I would describe the bottom of it as if an eclipse had took place, this black circle was blocking a light which was flickering down. In movies when people get abducted by this light that comes down and the centre bit is left clear, exactly like that. I don’t mean the light came down like that, what I mean is, that’s the way it seemed. It hovered then continued forward. If you know the colour vantablack, the new black that scientists invented, that’s the colour of it. It was visible but invisible. At the time I felt like crying, it honestly left me speechless and that’s hard to do. The drive home was deafening, we never spoke and today as I speak to people about it, its as if I cant be bothered talking about it because I’m left gobsmacked. Its as if I’m depressed and in a low place. That’s how it has made me feel and the fact ill never know what it was kills me. I am going back up tonight and finger cross I get answers.  NOTE: The above image is CGI.