In February, a former radio reporter related his encounter in 1979 at the so-called Bridgewater Triangle in southeastern Massachusetts.  I tracked down the other radio reporter in the car at that time, and there’s some starling new information that will have you wondering what really took place.  “Generally speaking, I thought the people who especially saw — before I spotted this device — I thought people who saw stuff like that were definitely a little nuts in the head. They were crackpots,” said Steve Sbraccia. “Now I have a different attitude about certain sightings.”  Until I tracked him down, now a television reporter at NBC17 in Raleigh, N.C., Sbraccia said he hadn’t really talked about what happened to him and then fellow Boston radio reporter Jerry Lopes on March 23, 1979. After a long day at work, in the same car, they were heading to the Raynham dog track, coming down Route 24 where it meets Route 106 in West Bridgewater.  “And I was driving and I said, ‘Ah gee, you see that?’ As we’re getting off the exit, it’s a strange object in the sky. It looked like sort of a baseball home plate,” Sbraccia said.  “We noticed a couple of other automobiles pulled off the side of the road, and we decided to do the same thing,” Sbraccia said. “To get a good view of the thing, I had to get out of the passenger side and stand next to the vehicle. And when I did, we saw this, this, this thing coming at us with this very bright light very much like this. And it passed directly overhead.”  Sbraccia said it was as big as three Boeing 707s, wingtip to wingtip. It hovered for a couple of minutes, and then took off. 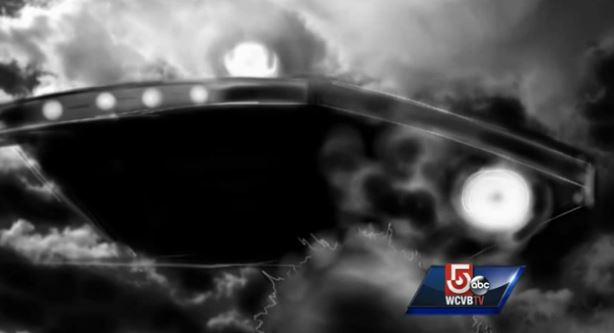 If that first close encounter wasn’t bizarre enough for Steve and Jerry — and apparently many others along where Route 24 meets Route 106 — wait until you hear what happened next.  Sbraccia at the time lived in Newton, Mass., about 30 miles away, and Jerry, about 20 miles away in Braintree, Mass.  “It was about 10 o’clock at night, and I was out jogging, and I saw the, I saw the same thing again. Now, I’m figuring at this point I must be crazy. I must be. How could I see the same thing within two days?” Sbraccia said.  He called Jerry.  “Flash forward two more days from that … and he is coming back from a friend’s house. It’s about 2 or 3 o’clock in the morning, he sees the same thing. He sees the light and so forth. But Jerry, because he was mobile and because he was in an urban area, he was able to get to the Braintree police station. He goes into the police station, he talks to the police officers and drags three of them out to the parking lot of the police station, and all four of them sit there and observe the thing,” Sbraccia said.  A reporter for The Enterprise of Brockton picked up the story and discovered that two credible radio news reporters weren’t the only ones who saw this thing.  Steve and Jerry started digging deeper. They checked with nearby Air Force and Navy bases.  “The FAA, no radar returns. Logan Airport in Boston,” Sbraccia said, “no radar returns. That bothered us tremendously.”  Then in 1990, mass UFO sightings over Belgium — 13,000 reports in all — caught Sbraccia’s eye.  “Several photographs of it were taken,” Sbraccia said. “This is a thing that’s almost identical to what we saw. If you look very closely, there’s that triangle shape, there’s the home-plate shape.”  NOTE: The above images are from the witness.

THANKS TO LATEST UFO SIGHTINGS