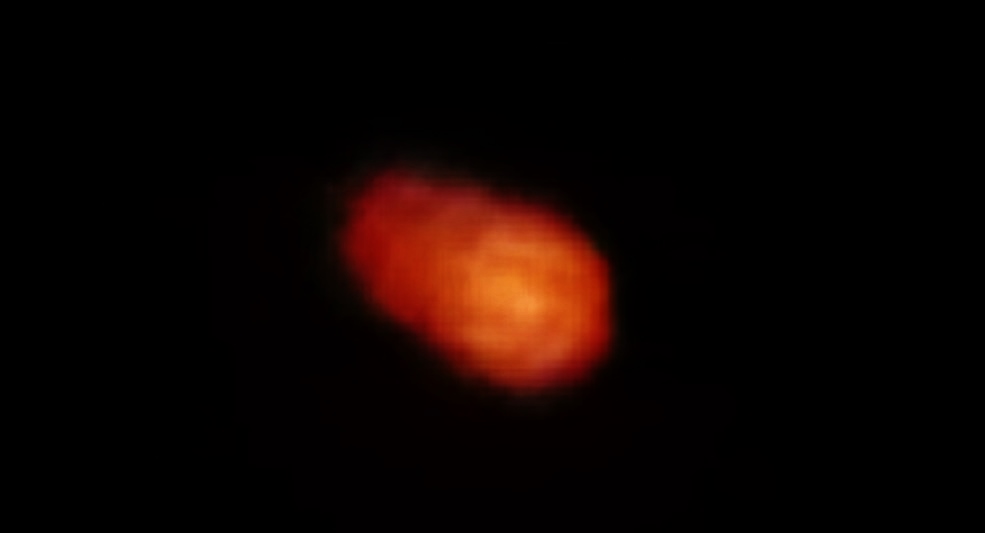 At roughly 11:30 PM June 17, 2013, (a Sunday night) seven circular objects flew in a straight line from SSW to NNE direction. First two went by one following the other; I jumped out of my hot tub and got my cell phone and took on picture of them with the flash on. (By the way, I do not drink and was fully awake and alert when this took place.) Then 5 others equally spaced on the same trajectory passed by with no sound. I tried to take pictures with the flash off and zoomed the Samsung Galaxy SIII camera using my fingers on the screen. I took several, three or four, more pictures but thought I did not get anything until someone else helped me a week later zoom the black pics until the objects appeared. The objects appeared to the naked eye as all having yellow pinwheels from the outside to the center of the bottom of the disc; at the center of the bottom of the disc, were three of four different colored lights including red, blue and green inside a small circle. However, the disc objects appeared in the pictures entirely different than they appeared to the naked eye. The pictures show a circular object with a plasma like coloring with none of the shapes or colors that were vividly seen with the naked eye. One picture appears to catch the edge of one disc or it is a multiple exposure of one disc that appears as a curve. Most importantly, these craft had no wings, no running lights like normal aircraft and made no sound. But the trajectory of these brightly colored disc was the same as military transport aircraft flew the day before I saw these objects. These objects appeared to be the same altitude and were twice the size of the multi-engine transport military aircraft and were gaining altitude similar to the military aircraft as they crossed the horizon from SSW to NNE. Again, these objects clearly were circular, with no wings, or tails and no running lights like all aircraft have. I have not reported this until now because I thought they may be some type of new military disc craft because they were flying in the same flight path of military transport aircraft heading NNE. But watching a Mufon show about sighting in Bucks County, PA, I thought everyone should know these disc objects crossed the Central New Jersey sky. Again, the pictures appear to show plasma like circular objects, while looking at them with the naked eye, they were clearly outlined as circular disc with yellow lights in a pin wheel and small colored lights in the center of the disc. Perhaps the Roswell craft has been reversed engineered and we now have this new secret capability.  KENS NOTE:  I feel todays digital cameras see things out eyes cannot see.  Slow shutter speed usually stretches an object at night but I do not think this happens all the time.  Your eyes are not as good as a hi-def camera’s especially the one’s with many mega pixels.  This case will be investigated my Ken Pfeifer of MUFON New Jersey.