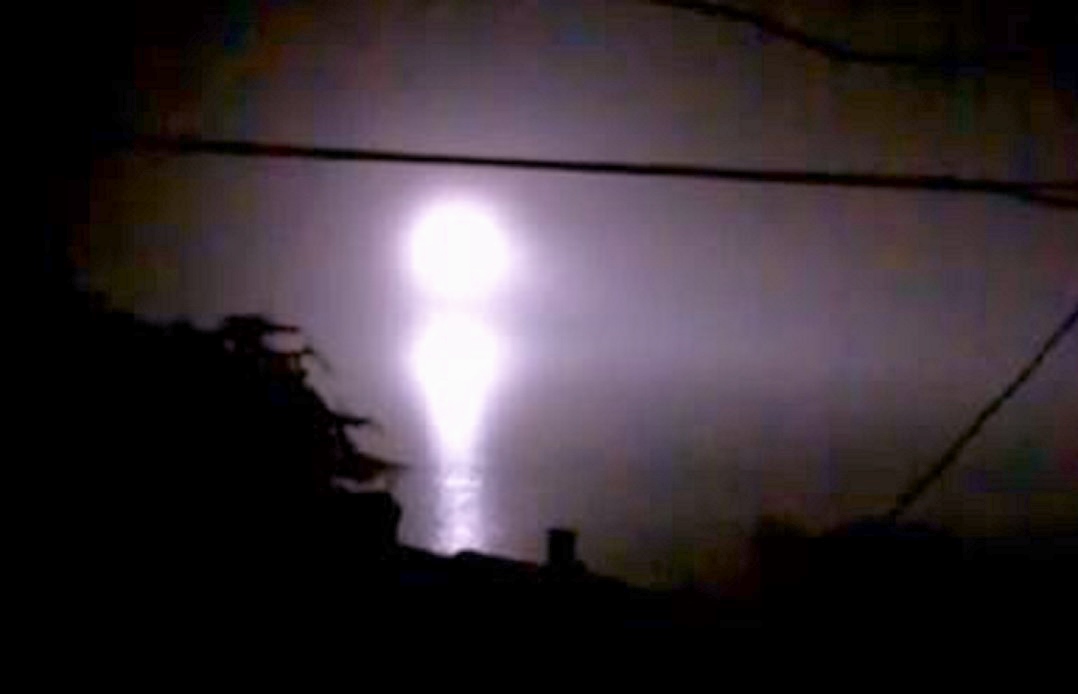 The Loch Raven Dam is located in Baltimore County, Maryland just north of the Baltimore City limits. On October 26, 1958, at 23:30 EST, two men, Philip Small and Alvin Cohen, witnessed an egg-shaped object hovering over the reservoir. It was approximately 100 feet long and 125 feet in altitude and brightly glowed white. The car power and engine failed when they approached at 200 to 300 feet from the object. The object emitted a flash. It then shot straight up with a loud noise and heat. The witnesses later reported their skin was reddened on the side facing the object.  Small and Cohen later stated:  “Shortly after you pass the dam…the bridge looms up in front of you at 200 to 250 yards away. We saw from that distance what happened to be a large, flat sort of egg-shaped object hanging between 100 to 150 feet off the top of the superstructure of the bridge over the lake.”  “We slowed and decided to go closer and investigate the object. When we got to within 80 feet of the bridge, the car went completely dead on us. It seemed as though the electrical system was affected: the dash lights went out, the headlights went out, the motor went dead. Mr S., who was driving the car, put on his brakes [after the motor went dead], turned the ignition once or twice. We did not get any whirring sound; we were pretty frightened at that point. We watched it for approximately 30 to 45 seconds and then, I am not sure of the sequence of events here, it seemed to flash a brilliant flash of white light, and we both felt heat on our faces. Concurrently there was a loud noise, which I interpreted as a dull explosion. Then very quickly, the object started to rise vertically. It didn’t change its position [aspect], as far as we could tell, during the rising.”  “The only different feature it had while it was moving was that it was very bright and the age became diffused so that we couldn’t make out the shape as it rose. It took from five to ten seconds to disappear from view completely. We were very frightened.”  “…We got back to a phone booth in approximately 15 minutes. We proceeded to call the Ground Observer Corps, with no result. Our story elicited only complete disbelief.”  Their initial attempts to file a report with the Ground Observer Corps were met with ridicule so they felt forced to report their encounter to the Towson Police Department who sent patrol officers to interview them. Noticing a sunburn-like appearance on their skin, the officers had them go to the local hospital for treatment. They were released later that night. The Towson police, not knowing how to handle the report, requested that Andrews Air Force Base investigation the sighting.

NOTE: Over the years, there have been a few undocumented incidents in the same general area. In 1978, a local fisherman, by the name of Mitchell, alleged that a ‘bright round light’ rose out of the lake (about 500 yds above the dam), hovered over the water for a few seconds, then dove back into the lake. A similar account was circulating among several Baltimore City Water dept. workers in 1983. The only difference was that the ‘ball of yellow light’ traveled along the shoreline for several minutes before it suddenly vanished. It was stated that the workers had trouble starting their work vehicles after the sighting. In May 2000, an administrator at Greater Baltimore Medical Center told me he witnessed a disc-shaped object that ‘looked like green fire’ fly across the reservoir while he drove home one evening in January 2000. He said he had a very good look at the object since there was snow on the ground and the lake was frozen and covered as well…which provided a very good contrast. This occurred near the Paper Mill Rd. bridge. He stated he stopped his car, got out and noticed a strong sickening-sweet odor that made him retch for several minutes. He claimed that he had trouble keeping food in his stomach for a few days and that his eyesight was so impaired that he was unable to operate a vehicle for almost a month. He also said that he experienced increased joint and back pain since the sighting. The cause of his illness was never determined. BTW, I attempted to contact the witness for some follow up information about a year later and was told he had taken his own life not long after our initial conversation. Since my original post in 2010, I have been told of two additional sightings. Both were disc-shaped craft that were seen hovering near the bridge area. I will continue to monitor the location. I believe that these craft and their operators have a specific attraction to the location, even though there have been renovations during the same period of time…Lon  Phantoms and Monsters.    NOTE: The above image was taken over the water on 8-25-11 at Bogeda Bay California.

1 thought on “MANY ALIEN CRAFT SIGHTINGS AT LOCK RAVERN DAM”