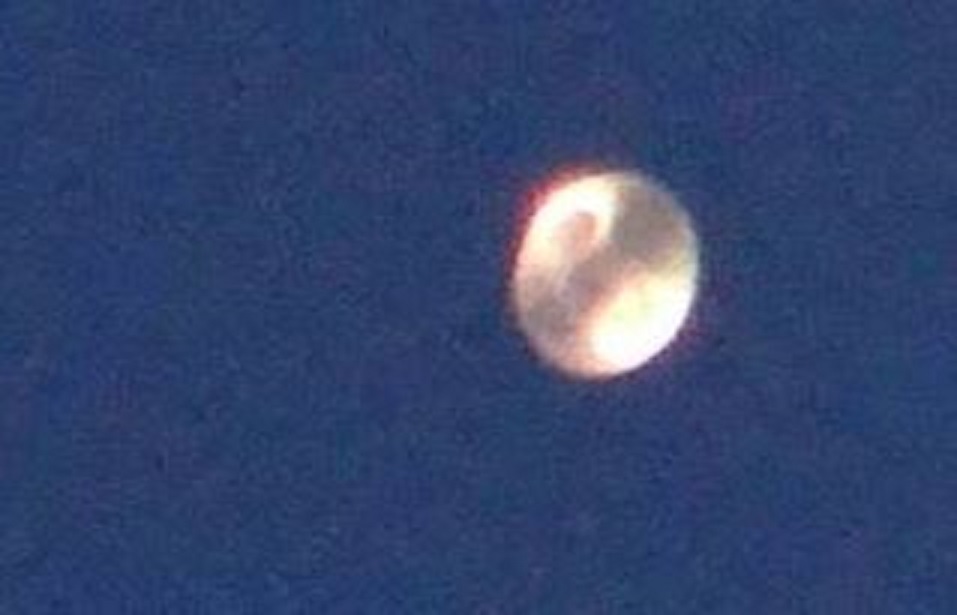 September 10, 2016, Pepe (fictitious name), wife, 22 yoa daughter, and 15 yoa son were in the process of exiting their house to enter their vehicle. Son alerted Pepe about a bright light hovering above near the zenith. Pepe saw the light and remarked it was not only too high over the horizon to be the planet Venus, but also brighter. The object was stationary and to Pepe’s eyes it seemed to consist of two lights in one. Pepe asked wife to bring camera from the house and asked her to take a photo of the light. Wife took the first photo. Camera is an old Sony digital camera, model DSC-HX200V, with an integrated zoom lens made by Carl Zeiss. Wife handed over the camera to Pepe. Pepe took a photo. He waited a few minutes and when he tried to take another photo could not locate the object in the LCD screen. His son advised the object was still in the same place and after re-acquiring the object he took another photo. Pepe advised the three photos had different zoom settings.

After approximately 7-10 minutes a large cloud hid the object. After realizing it would take a long time for the cloud to pass they decided to enter vehicle and departed area. From time to time Pepe pulled over the vehicle in order to try to locate object, but the cloud was still hiding the object. When the cloud finally moved away the object was gone.  Pepe regrets he did not try to take more photos of the object at different zoom settings. He thought at the time the object lacked any features and was not doing anything. His overall impression of the experience is that whoever controlled this object wanted for him not just to see it, but to take photos of it.  Date of Sighting: 10 Sep16 Geographical Location of Sighting: San Juan, Puerto Rico Description of Area/ Surroundings: Urban Time of Sighting: Shortly after 6:20 P.M.  Weather Conditions: Clear Circumstances for Becoming Aware of Object: Son alerted his father (Pepe) Number of Objects: One Apparent Size of Object at Arm’s Length (Subtended Angle): Similar to planet Venus Approximate Angle of Object from Horizon: Approximately 80 deg.; Cardinal Orientation if Other Than Zenith (right above head): West Estimated Distance to Object: Several thousand feet Estimated Altitude of Object from Ground: Several thousand feet Color of Object: White light. Appeared as two lights close together.

Shape of Object: Rounded Apparent Solidity of Object (Translucent or Solid): Solid Opaque or Bright: Bright Brightness of Object if Applicable: Brighter than planet Venus Lights Observed on the Object: The object seemed to glow. No additional lights observed.  Lights Observed Coming from the Object (beams): None Any Sound Detected: None Any Observed Rotation of Object: None with the naked eye. Only by looking at the photos.  Observed Behavior of Object: Stationary Duration of Sighting: Approximately 7-10 minutes Circumstances for Losing Sight of Object: Cloud Number of Witnesses (Adults/Minors): Four (three adults, one minor) Photo or Video Recording Attempted: Yes. Three digital photos taken.  If Photo/Video Obtained, Provide Brand and Model: Sony DSC-HX200V Personal/Subjective Impression of this Sighting by the Witness(es): Pepe felt the object was posing for him Other Sightings in the Past by the Witness(es)? (Yes or No): Yes, all four If Yes, Determine Approximate Number and Frequency: A lot and very often Does/Do the Witness(es) Wish to Remain Anonymous?: Yes, at least for no