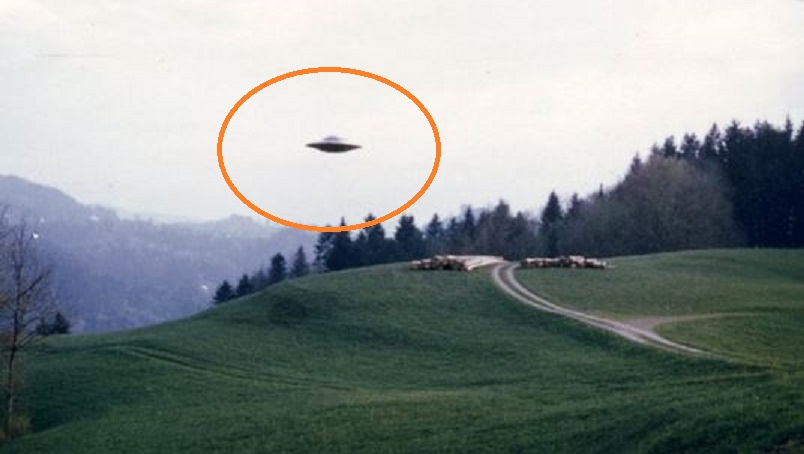 On the night of 8 March 1993 Erwin Lohre, an artist and former military pilot, was sleeping at his family home in Braunschweig, north-central Germany. At around 12:30am, he suddenly awoke with a stabbing pain in the area of his spine. “I at once took a painkilling tablet and lay down again,” he recounted to Dr. Peter Hattwig, a UFO investigator. “Meanwhile, my wife had also awakened simultaneously.” Suddenly, we heard a clear humming sound coming from the sky. After three or four seconds this noise, which seemed “metallic”, as though produced by a centrifugal force, grew louder, and then, through the bedroom window, we saw a bright round shining object stationary at a height of some 10 metres or so above the birch trees to the east. There was a full Moon at the time. But despite that, our bedroom and terrace outside was lit by something even more powerful than the moonlight – a bluish- white colour like neon lighting. At the same time we both felt a strange metallic sort of taste on our tongues.

Up till then I had scarcely given a moment’s thought to UFOs, but it was now quite clear to me that I was looking at an unknown flying object, and I said to my wife: “Look! See what it is! They are going to land here!” Being a former fighter pilot myself, I wanted of course to see what was going on. But when I tried to stand up, I found that I could not move, and for my wife it was just the same. Also our two kittens, which sleep on the foot of the bed, were both sitting there, both upright, and looking as though they had turned to stone. Meanwhile, our bedroom window was being bathed, on and off, in a bright yellow beam of light apparently coming down from above.  I didn’t get frightened because I was so completely spellbound. Indeed, if anything, my feeling was rather one of annoyance because I was immobilized and unable to get to the window. But afterwards, my wife had a thorough fit of the shakes. The eerie apparition lasted altogether about 40 seconds or so, and then the vivid light ended abruptly. Then, some 30 or 40 seconds later, we saw the UFO fly over our bedroom window in a westerly direction and vanish. Simultaneously the paralysis ended for both of us. My wife was too upset to be able to sleep anymore, and so was I. 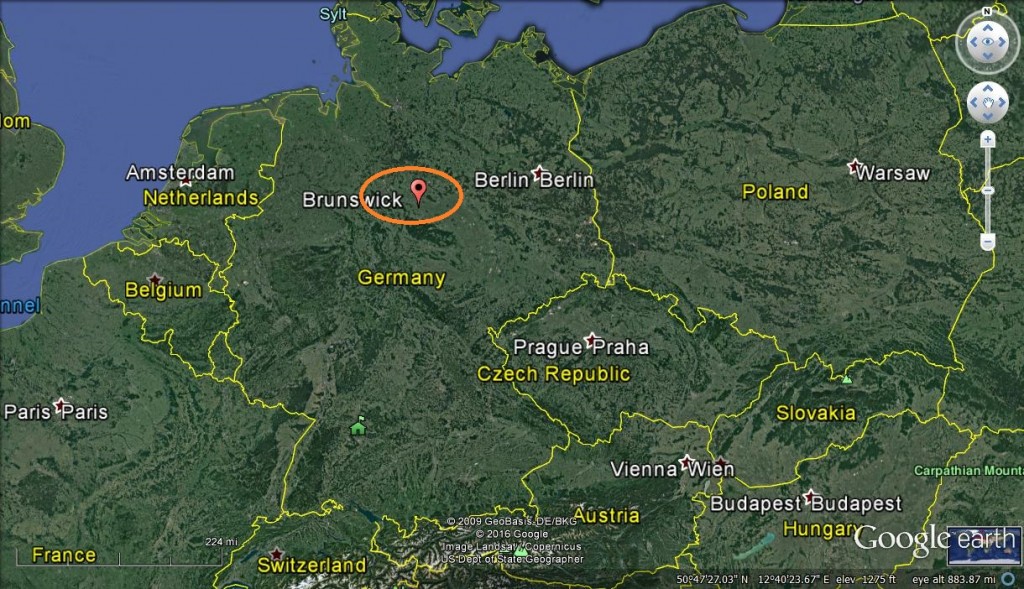 Then, about half an hour later, we heard the same sound again, coming from the other direction. Our bedroom has windows on the two sides, and so we got a full view of the UFO for the first time. From a distance of about 300 metres, we watched it flying straight towards us. Again we heard the same sounds as before, and for about six seconds or so we could see its shape absolutely clearly. The craft was shimmering with all the colours of the rainbow … the cupola was a bright, shining silver. The underside had three coloured apertures and a central light.  Then, just as the disc – which I estimated to be about 10 metres wide – was nearly right over us, something quite unbelievable happened. It simply dissolved into thin air – between one-tenth of a second and another – and it was gone, without any transition!

Lohre reported the encounter to a local newspaper. “After the newspaper had published the report,” he said, “25 people contacted me, including one whole bowling team that had been traveling home at the time. Unfortunately none of them was prepared to go public as eyewitnesses.” Dr Hattwig asked Herr Lohre if he had the impression that the craft was ‘seeking’ him personally. “Absolutely!” replied Lohre. “For it was hovering there right beside my bedroom window, as though they knew exactly where I was. It is true that my wife and I were both paralyzed, but unlike me she felt no pain in the spine.”

The day after the incident, a number of peculiar developments occurred. “At 4 p.m.,” recounted Lohre, “my wife and daughter and I – who were all in different rooms at the time – saw a light like a photo-flash in front of our TV sets, accompanied by a crackling sound. Then, an hour later, phenomenal discharges came from the TV sets downstairs. Furthermore, we found that our computer had acted up. We never found any reason for that, and it has never happened again. Then, at about 10 p.m., suddenly a tremendous banging started up inside our wardrobe, as though somebody was shut in there. But despite all our efforts and searching, we could find absolutely no reason for the noise. And every time we opened the wardrobe, the noise stopped. On and off the eerie happenings went on for a further eight weeks, and disturbed us badly.”

“After the encounter”- Lohre said  – “I had constant pain in the spine, and, a week later, using a mirror, I discovered on my spine, at the level of the buttocks, two red marks, about 2 cm apart. I went to see a doctor, who then found two black spots below the skin. He applied an ointment, and he referred me for a CAT scan (Computer tomography), but before I was able to go there two little black lens-shaped things came out of my back. I put them away very carefully, to show them to the doctor, but by the second day following they had simply evaporated.”

Dr. Hattwig asked Lohre what was his explanation for the little black things and the latter had none. Dr. Hattwig asked:  “Have you ever heard anything about UFO abductions?”. Lohre eyed Hattwig with an unbelieving look. As he was to admit to him later, such an idea was utterly new to him, and up till then he had never heard of anything of the sort.  But later on Lohre replied: “I did indeed read about it later on, and I did play around for a while with the idea of undergoing hypnosis, but so far I haven’t taken that step.”   This was a wise decision on Lohre’s part because regression hypnosis is known to be very unreliable. NOTE: The above image is CGI.

In the early morning of November 27, 1995, Samuel Rodolfo Barreras was working as a security guard at a place called “El Trigal”, an urban area outside of Havana City. While inside his post shelter through the window, he noticed a bright light approaching his location from the sky. Samuel assumed that the light was an aircraft that was having trouble and was in danger of crashing. To his amazement, the light shortly became a hovering flying saucer above the roof of one of the building. While in awe watching the craft, he realized that he was completely paralyzed and was not able to move a muscle. The craft displayed some flying maneuvers in order to descend to the centre of a small plaza that was in the middle of this building complex were Samuel was guarding. Slowly, the craft descended hovering half a meter over the ground.  Due to shock, Samuel still was unable to move, but still remained watching out the windows while the craft was coming to a stop. He did not see any landing gear, the UFO was simply floating half a meter over the ground completely still. A minute passed and a hatch opened upward from the lower part of the craft. This door or hatch was not initially visible or noticeable by Samuel when the craft was hovering prior to stopping.

An entity emerged from the inside of the craft. Samuel described it as a humanoid in figure, around six plus feet tall but based on his mechanical movement he assumed that was some kind of “robot”. The entity walked from the ship in the direction of the location were Samuel was stationary. Samuel was growing in fear and tried to break a piece of the window to use their parts as defence weapon just in case, but it was impossible due to the paralysis that he was under. Luckily almost 10 meter away from Samuel’s location the entity made a turn in a different direction and decide to inspect another area.  Samuel observed this entity carefully. It was wearing a tight dark clothing that seems very “shiny”. He noticed the unusual shape of its head and it had very big dark eyes – he said, Samuel stated that he was not sure but its eyes seemed similar to a camera diaphragm. The entity stood still over 15 minutes while moving its head in different direction looking around, then retraced its steps back to the craft location and board it. The hatch closed immediately and some seconds after the lower part of the craft lit up with some sort of lights or turbines as Samuel described them based on the high luminosity and humming sound that was creating similar to bees but in a higher pitch.  The craft started a slow ascend while this circular array of blue fluorescent lights were gaining in intensity and power. Once the craft was an altitude parallel to the roof of the building, in a split of a second it took off at an impossible speed, it looked like it disappeared instantly from the location. Shortly after the craft departure, Samuel gained control of his body and was able to move, he quickly searched for a paper and pencil to sketch the craft that he just witnessed.