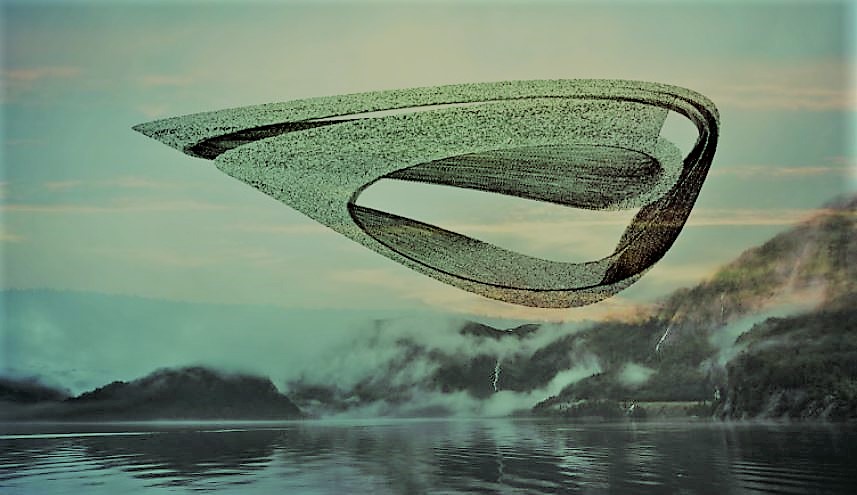 The alleged encounter over the waters of Lintel Lake in Germany in the summer of 1981 is not only one of alien abduction but one that left the witness with a previously unknown talent. Such talent, in fact, that he would go on to make quite a name for himself in his field. Perhaps that then is the reason for his desired anonymity. In fact, this detail of such sudden talent makes the encounter rather unique.  Between 5 and 6 am in mid-August 1981, on the banks of Lintel Lake, near Rheda-Wiedenbruck, Germany, a cosmic encounter was about to unfold in the otherwise serene surroundings. The main witness, labeled rather unimaginatively “Mr. X” in the report due to his request for anonymity, would often ride his bike to the lake from the city where he lived and then stroll around the water, enjoying the serenity it offered and the nature on display. On this morning, however, that serenity, at least visually, was about to be interrupted by the appearance of a “gigantic object” which suddenly appeared and was now hovering silently over the water. There were no visible windows of any kind and the object “resembled a plate turned upside down!”   The only other person nearby that morning was a fisherman on the other side of the water. Mr. X had noticed him moments earlier as he began his stroll. He turned his attention in his direction, wondering if he too could see the monstrous airborne craft in front of them. However, upon located him, he could see the man was being taken somewhere by three “men in sparkling suits”.  Telling himself that the men were likely from the Ecological Guard, Mr. X continued forward towards the craft’s location.

As he did so, the craft began to descend to a grassy area of the water’s edge. Despite the uneven ground, it appeared to stand perfectly straight. Then, he could clearly see an elderly lady emerge from the craft with a dog, which appeared to walk underneath it suggesting it was hovering over the ground.  Becoming increasingly confused, and in an effort to make sense of the bizarre circumstances he suddenly found himself in, he told himself this craft must be a “state-of-the-art” transport system. Perhaps one that the German authorities was still testing. So much so that he began to fumble around in his pockets for Marks in case there was a charge for getting on board.  He could see an oval entrance with a platform stretched out in front of it. Mr. X stepped forward and onto the extended walkway. As he did so he suddenly heard the ringing of the bell on his bike he had left on the grass. As he turned around, one of the men in the sparkling suits was examining it. From this distance, they looked “semi-transparent”.  Enthralled with the figure in front of him, he suddenly felt a sense of vertigo and the smell of “burning rubber” filled his nose. He could sense more of the brightly glowing men around him. At that point, he must have lost consciousness.

The next thing he realized he was “on an invisible bench” and all around him were “humanoid creatures”. He was the subject of some kind of examination. One of the humanoids was staring at him throughout the procedure – something which made him feel particularly uncomfortable.  When he turned to his right, he was shocked to see the fishermen from earlier. A quick scan of the room would reveal a “cut off head of a cow!” It had one of its eyes removed and one of the horns had been cut clean off. Its jaws also featured chains attached to it.  In his head, he could hear orders from the humanoid. However, his thoughts were confused, and he struggled to make sense of what he was being told. His body had a “light” feeling to it as if he was “devoid of some internal organs”. Without fully realizing how he had got there, he would suddenly find himself in a “blue, misty” room.  There were more humanoids present in this dark, unsettling enclosure. They all wore “suits” and would conduct further examinations of him. All the while, they would act as if he wasn’t there, such was the lack of emotion on their faces.

Mr. X awoke several miles away from the spot he had entered the craft. His head hurt immensely as if he was suffering from a “terrible hangover”. He checked his watch only to discover it was frozen at 6 am (the time the craft had arrived). He stumbled to a car parked on the road. The clock inside declared it was just after 9 am.  He returned home, dazed and tired. As he washed and prepared for bed later that evening, he noticed how his skin had a reddish-brown tinge to it. It was as if his whole body was extremely suntanned. He could only imagine this was some consequence of being on board the other-worldly craft.  He would also soon discover another apparent consequence of his encounter. Mr. X had a sudden desire to paint. And what’s more, the work he began to present was of such a high standard the 55-year-old would make a comfortable living from this new-found talent.  This is an interesting dynamic to this case. Had the sudden talent been a gift by his cosmic abductors? Or had the encounter been so surreal that it somehow unlocked a previously cut-off part of his brain? As we will look at in a future article, while some have noticed an “increase in awareness” and even a sudden development of “psychic abilities” following an abduction event, the case of Mr. X from Poland appears to stand on its own.  NOTE: The above image is CGI

Thanks to https://www.ufoinsight.com and  Marcus Lowth