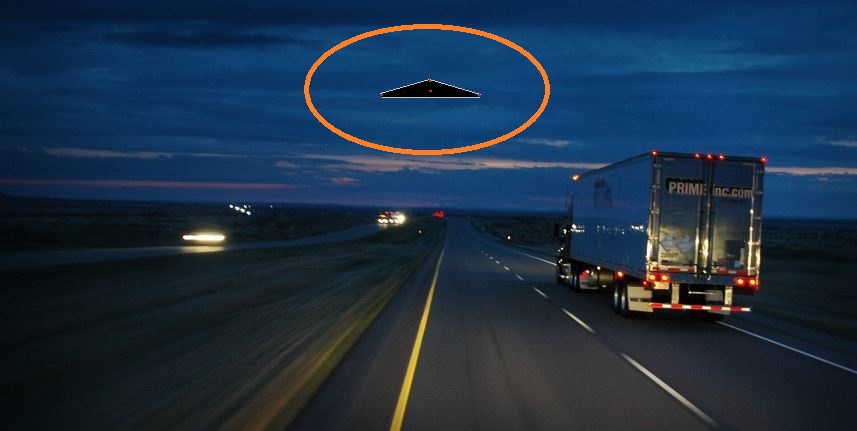 TRIANGLE CLOSE ENCOUNTER  VIDEO FROM CALIFORNIA
.
MAY 7, 2016   ………..  HURON CALIFORNIA
.
This was recorded from my dash cam on May 7th 2016 about 3:00hrs. On I-5 around the 325 mile mark, heading south. I was traveling with three other trucks who also saw this craft.  I first saw a light sweep the sky on the right side of this video frame. One swept across the sky and a second one occurred a few seconds later. After the second light the first thing I thought was someone was shinning deer.  A couple more second passed and we saw bright white lights on what I thought was a plane moving from right to left out in the distance going across the highway. Maybe 2miles out in front of us, very low to the ground.  It crossed the interstate and climbed in attitude and started to circle heading east and than north, and than south returned to roughly the same place it crossed the interstate and crossed back going west, and than the object and lights disappeared. I kept watching out my passenger window to see if I could spot the lights, but I saw nothing. I turned back to watch the road ahead and talking on the CB with the other driver about the strange way that was flying. There was something odd about the way it maneuvered. I notice lights reflecting in my passenger window and thought it was from the oncoming traffic, and I glanced over to see what it was and saw this craft coming straight at me.  I thought it was going to crash into me at that point. It had three very bright white lights. Like large round spotlights across the font edge of the vehicle. When I say edge thats all I could make out as it didn’t look to have body or height to it. As it approached It slowed and turned and banked almost in place at the same time, and came up over my truck. It made no sound, it had no wings, no marking lights, no fuselage, no tail, no Plane, no drone, no helicopter. NOTE: The above image is CGI.
.
KEN PFEIFER WORLD UFO PHOTOS AND NEWS
WWW.WORLDUFOPHOTOSANDNEWS.ORG
WWW.WORLDUFOPHOTOS.ORG
.
CHECK OUT THE VIDEO HERE >> http://www.dailymotion.com/video/x49l5jr_triangle-ufo-over-huron-ca_tech
.
.