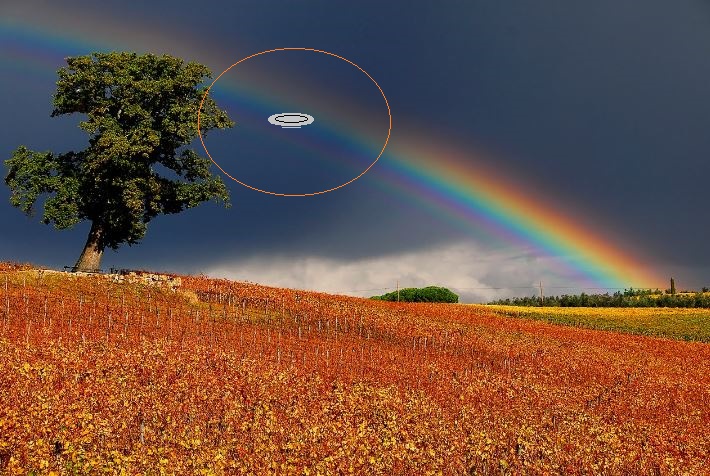 SOLID ALIEN DISC ENCOUNTER IN OTTAWA CANADA
.
MARCH 17, 2016    ………..   OTTAWA ONTARIO CANADA
.
I was sitting in my living room watching television about 7:00pm and out my large window which faces northwest over Quebec, I noticed a really strange colored cloud in the otherwise mostly blue with some grey clouds. It appeared like a big swirl of rainbow colors – very bright and not easy to miss. It was like one big whirl of colors of the rainbow but not in the shape of your arc type rainbow. I know these are called rainbow clouds but I have only seen one once before and that one I reported to Mufon too, last year I believe it was. When I had my first sighting of a rainbow cloud last year I noticed two UFOs seemingly to come between two vertical short rainbow clouds when I held up my binoculars – couldn’t see the UFOs until I used the binoculars, so this time when I saw another rainbow cloud (different shape than the first though) I knew to look further with the binoculars again. Prior to remaining solidly rainbow colored the cloud swirl formation had a more whitish color to it and when I looked through the binoculars there was what looked like a tunnel tube like shape that was quite long and on the outside it had ridges. It appeared to be like a tunnel is the only way I can describe it, I almost expected something to come out of the end of it that was well formed and perfectly round and looked like a giant hole. Nothing did come out of it unless when the dark clouds came over later something came out but I couldn’t see at that point. The tunnel sort of faded in form off and on as the colors of the rainbow intensified. When I spotted the UFO,  the tunnel had almost totally gone. At first the colors of the cloud were just moving around a little and changing in depth of color and I didn’t see anything else but I persevered and sure enough about half way through the viewing there it was, near the upper middle part of the rainbow cloud.   A definite sold disc just sitting behind the cloud. It stayed put for the whole sighting but behind the mist of the cloud.
.
Where it was appeared a peach like color but I’m sure that was the cloud and not the UFO itself but I can’t be sure. It was not dark though like my first two in a rainbow cloud, definitely lighter – possibly white or silver. There were no flashing lights or stationary ones but it seemed a little reflective but not much. There was no sound but it was very high up and far away. It was still quite light outside and earlier in the day, about 4pm there had been a storm including real downpours of rain that didn’t last long but were severe plus we did have thunder and not sure about lighting – not all areas of the city got the same effects from the storm. I believe the first sighting of the UFO in the rainbow cloud happened after a storm as well and about the same time. At one point in the sighting two huge black billowy clouds seemed to appear out of nowhere as there were no other black clouds like that before when I first saw the rainbow cloud and they just seemed to engulf that whole area and blocked out the rainbow cloud and UFO altogether then just as fast the black cloud was gone and I am not sure if the UFO was still there or not. In a few minutes though the rainbow cloud faded and all was gone. Like I said I knew to grab the binoculars to see this type of cloud as it had a UFO, well two actually, in it a year back and so of course I wondered if this one would be the same and sure enough there it was. The first sighting, I believe I reported to Mufon, was sort of scary because the two discs were large, very large, and flat and coming out of the rainbow cloud and looked threatening because of the color and size like motherships but the one yesterday was small and light colored and stationary and pretty actually due to the peachy color of the cloud covering it. Now the thing is that as I have told Mufon many times before (I have had 6 or 7 sightings now – all different over the last 5 or 6 years) that all my sightings take place in the same area over Quebec not far from Gatineau. This seems to be a real hotbed for UFO activity at least from what I have seen. This is near a large river and they seem to stay fairly close but the sightings are over land, over Quebec. Chalk River isn’t too far from Ottawa where the sightings all took place plus I do believe there is a fault line through that area of Quebec but you can check to be sure. I really am starting to wonder if this area has a portal in it, just seems so strange so many sightings are in the same confined area of sky.  NOTE: The above image is CGI.
.
KEN PFEIFER WORLD UFO PHOTOS AND NEWS
WWW.WORLDUFOPHOTOSANDNEWS.ORG
WWW.WORLDUFOPHOTOS.ORG
THANKS TO WWW.MUFON.COM CASE FILES.
.
.