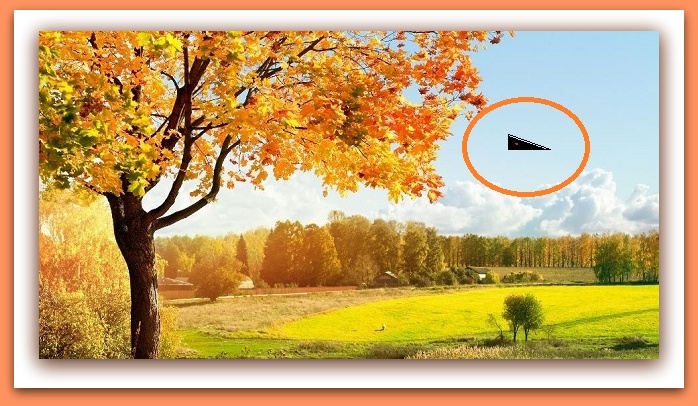 BLACK HELICOPTERS AND TRIANGLE UFO’S OVER NEW JERSEY
.
JULY 14, 2015   …………. DUMONT NEW JERSEY
.
I was at my girlfriends home and her parents called us outside. They do not speak english but they were pointing at the sky so I looked up and saw the lights pulsating from a faint yellow then to red and back a glowing white. It was daytime so I assumed it was just a plane at first but there was not a cloud in the sky and I was unable to see what was in the middle, as if the lights were just there and the actual craft was invisible. After observing I pulled out my phone and it began to move back and forth. Thats when I knew for a fact I was not looking at a plane considering planes can’t move forward then move backward without turning around or at that speed. Soon enough it was gone it didn’t speed off into the sky it just disappeared. Maybe 15 minutes later I’m back inside the house and I was able to hear helocopters so I looked out the window and sure enough there was two black helocopters side by side. And since that wasn’t weird enough the helocopters were almost circling the town as if it were looking for something. It wasn’t a news helocopter it was not the coast guard which I do sometimes see. Just pure black  helocopters. During the sighting I was feeling more anxious then I believe I ever have before not even a bad anxiety but just anxious for example I’m about to go on a trip somewhere I have always wanted to go. Thats how I felt. For the next few days I could not stop thinking about it. I actually snapped a few pictures but I only actually caught the lights once so I do have one picture of what I was seeing. Also before I forget the triangle lights had some sort of tail following it. Another light that was going around it at some points but majority of the time behind it following it. The tail looked just like the other lights except when the triangle lights moved the never moved out of place from the triangle. Just a perfect triangle the whole time while moving and while stationary. Thank you I hope this helps feel few to email or whatever you want if you have anymore questions. In the photos it might seem like just a blue screen but take a closer look you will see the triangle and the tail.  NOTE: The above image is a rendering.
.
This case is under investigation by Field Investigator Karen Diaz of MUFON New Jersey.
.
KEN PFEIFER WORLD UFO PHOTOS AND  NEWS
WWW.WORLDUFOPHOTOSANDNEWS.ORG
WWW.WORLDUFOPHOTOS.ORG
THANKS TO WWW.MUFON.COM  CASE FILES
.
.
.