April 1561 – A War In Heaven? One of the most astounding of documented sightings of aerial phenomena took place in 1561 over Nuremberg, Germany. What was described could only be called a war in the heavens, with a wide variety of craft ranging from spheres to spear-like cylinders to crosses. The sky was apparently filled with the machines, clashing in battle. Comets and such were well identified and charted in this period, so it is highly unlikely that what the people witnessed was merely a celestial phenomenon like a ‘meteor shower’, as some debunkers suggest. Rather, what is described are physical objects of unique detail and shapes, in ‘battle’ for over an hour. The battle was such that a winner was perceived as well. Spheroid UFOs were seen emerging from cylindrical ‘motherships’. At the conclusion of the battle, it seems a magnificent, black, spear-like super-ship of some kind came upon the scene… It began at dawn, as dozens, if not hundreds, of crosses, globes and tubes fought each other above the city. It ended an hour later, when “the globes in the small and large rods flew into the sun,” and several of the other objects crashed to earth and vanished in a thick cloud of smoke. 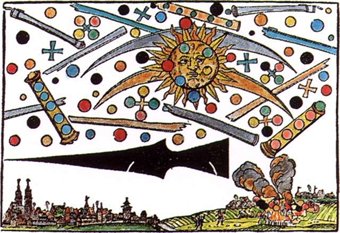 According to the Nuremberg Gazette, the “dreadful apparition” filled the morning sky with “cylindrical shapes from which emerged black, red, orange and blue-white spheres that darted about.” Between the spheres, there were “crosses with the color of blood.” This “frightful spectacle” was witnessed by “numerous men and women.” Afterwards, a “black, spear-like object” appeared. The author of the Gazette warned that “the God-fearing will by no means discard these signs, but will take it to heart as a warning of their merciful Annunciation with St. Emidius Father in heaven, will mend their lives and faithfully beg God, that he avert His wrath, including the well-deserved punishment, on us, so that we may, temporarily here and perpetually there, live as His children.”