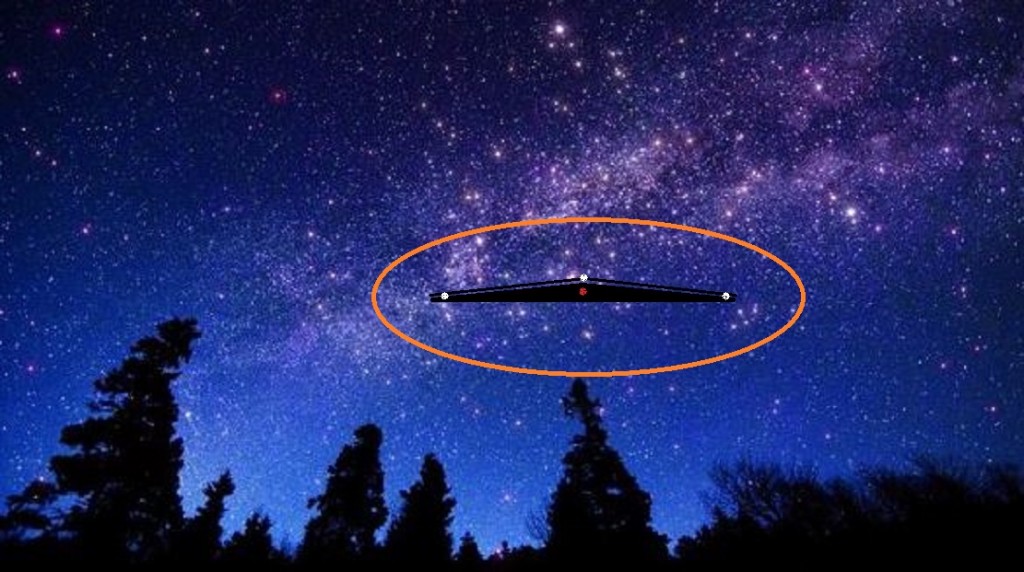 At about 9:25 P.M. eastern time Monday, April 1, 2013, I was outside letting my dogs out.  It was a very clear night and cold.  I was waiting on them to do their business and looking at the many stars and constellations.  I suddenly saw something to the west and at about a  60-70  degree angle up from the horizon.  It was a triangular shaped object moving in a straight line from slightly southwest to slightly northeast, but mostly south to north. It was difficult to see due to the dark coloring – slightly lighter than the night sky and dark brown/gray coloring.  There were extremely dim “lights” on the bottom – three at each corner – each grouping in a triangle shape – all a rusty red-orange color –very dim.  No blinking lights at all.  No sound before, during, or after.  It moved at a constant speed and fairly quickly.  I saw it for probably 10 seconds as I could only visualize it between two groupings of trees; it was not bright enough to see when it moved farther northeast behind the second group of trees. I don’t know how big it was or how far away it was – I am not good at judging this.  It appeared to me to be the size of 3-4 full moons (when it is directly overhead, not the huge moon size when it’s near the horizon).  I have seen a stealth plane fly directly overhead once before and this was nothing similar to it at all.  I have never seen anything like this before, but I hope to see this again someday.  Truly awesome!  NOTE:  The above image is CGI.