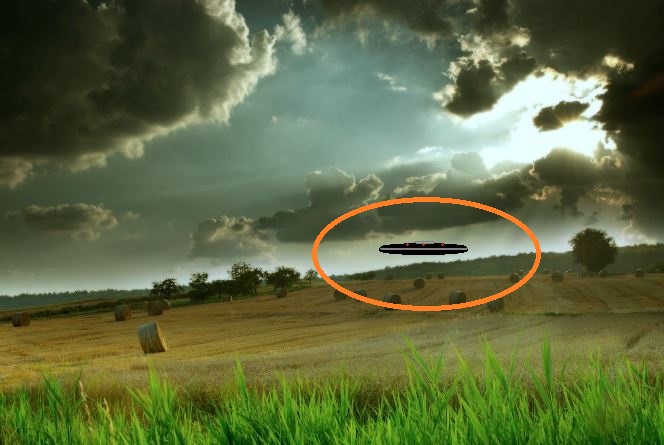 ROYAL CANADIAN MOUNTED POLICE INVESTIGATE CLOSE ENCOUNTER
.
SEPTEMBER 1, 1974    …………. LANGENBURG SASKATCHEWAN CANADA
.
By far the most publicized UFO landing in recent years occurred during the 1974 Labour Day weekend on a rapeseed farm outside Langenburg, Saskatchewan, close to the Manitoba border. As a calling card, the five dome-shaped UFOs that landed on Edwin Fuhr’s farm left five of the most distinctive nest-like depressions ever seen. The case also demonstrates the interest UFOs appear to have in studying our cultivation efforts.  The scene unfolds on Sunday morning, September 1, 1974. At about 10:45 AM Edwin Fuhr was out swathing the rape when suddenly he came upon a dome-shaped object fifty feet in front of him. Thinking it was a joke perpetrated by his neighbour, Fuhr jumped off his tractor and walked within fifteen feet of the object. His curiosity quickly turned to shock when he realized that the thing before him, now visibly revolving, was hovering about a foot above the ground.  Bewildered by the sight, he slowly backed away, making sure not to turn his back to the craft. As he mounted his swather, he became even more alarmed; there were four more identical objects nearby, all visibly revolving in unison, in a clockwise direction!
.

In an interview with UFO researcher Ted Phillips, Edwin Fuhr described what had happened:

They were all revolving, all four of them. I sat there like I was frozen, I couldn’t move nothing….I sat there for, it could have been fifteen or twenty minutes, I don’t know. From one of them, something was probing around the grass….It was like, oh, I would say, the size of a fifty-cent piece, it looked like a probe, and the grass was all twisted and you could see marks like something had jumped here and there, all over. Then, they all went up, straight up, to I would say about two hundred feet and they stopped at that distance. When they hit the two hundred foot mark, they stopped spinning and a vapour floated out, an exhaust. The exhaust was only about six feet long, like a vapour, it was two ports at the bottom of it.  You could see they were about twelve-inch diameter ports and they were all like that. They were in a step-like formation, the lower was the last to go up… And after that, I would say only a second, there was a downward wind, a pressure that flattened the rape that was standing and I thought, “Oh, here goes my crop.” It just took seconds to get to that height (two hundred feet) and then they were just standing and after that, into the clouds and they were gone.

Fuhr went on to describe the craft in detail:

The color of the machine was like a brushed stainless steel. It was rough and you could see while it was revolving that it was sort of grooved all around; you could see kind of grooves, they were darker grey….a dark grey…like it had been hot at one time, like steel that gets hot and cools off.²

Recovering from shock, Fuhr inspected the area where the craft had landed. There were five perfectly round rings of flattened rapeseed which had been swirled in a clockwise direction. After hearing of the incident, Fuhr’s brother-in-law contacted the Royal Canadian Mounted Police. They arrived the following morning and in a report, the investigating officer, Constable Ron Morier stated:

I went to the scene…where we spoke with Edwin Fuhr and examined the circular patterns left by the saucers. There were five distinct circles, caused by something exerting what had to be heavy air or exhaust pressure over high grass.