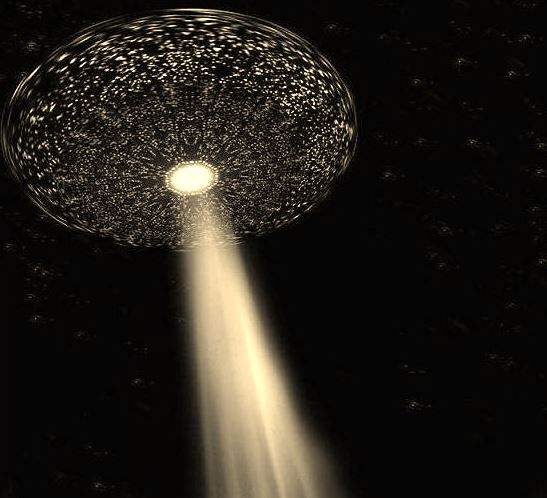 Me and my mom were leaving the store Bradlees, it closed at 9 pm so I know it was 9 pm that this happen. It was when I was almost 11 years old about 2 weeks betore my birthday which is march 13 so this happen approximately on March 1,1980.    My mom and me were in the car and we were waiting for traffic at the stop sign and in front of us we noticed a plane probably a 747 and hovering above it very close was a circular silver UFO with windows around it flashing red blue and white lights. It quickly went in front of the plane and you could clearly see all the details of it with the planes lights shining directly on it. My mom told me it was tellipathically communicating with her and telling her it wanted to land. I went in the back of the car from the front seat to look out the back window and realized it was actually following us. I don’t remember being scared but definitely concerned that is was communicating with my mother but seeing what I seen, it was probably too much for me to process at my age. We only lived 10 minutes away and we got home at 12:30 pm at night so this always bothered me.  I have no memory of those 3 1/2 hours. The next thing I remembered was we were in the opposite direction that my mother turned in a park in Nutley New Jersey and the UFO was above us and we were on foot in the park and my moms car was running far away. I remember being excited and calling out to someone going in their house to look up at the sky but he probably thought we were crazy. I always felt we were abducted because of the memory lose and my mother did call Clifton police when we got home and they said that hundreds of calls were coming in from a UFO siting that night. My mother never talked about it again I think she might remember more than me. I do remember when we were in the park it was directly hovering over us and there was no noise and when it took off it was faster than anything I’ve ever seen in my life. NOTE: The above image is CGI

This case is under investigation by State Section Director Glenn Green of MUFON New Jersey.