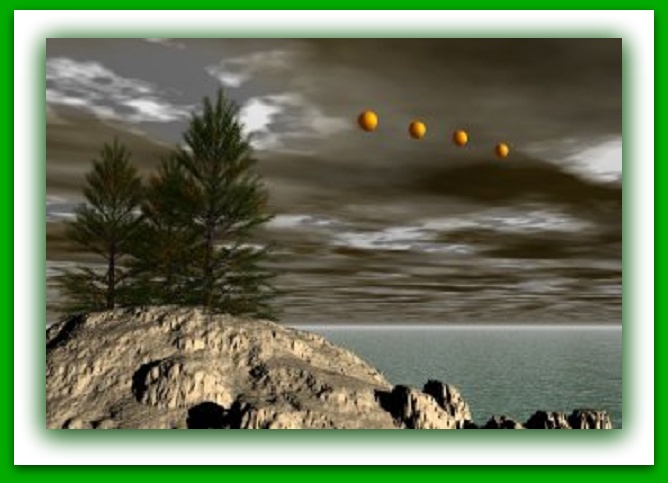 Shape: Fireball – Duration: 10 minutes – Stationary golden lights, singles and a horizontal group of four. Bloop/whoosh sound. Thunder of jets diminishes into distance, several stationary golden lights about 100 times larger and brighter than a star.  First sight due south, low on horizon, 5 second duration. Second sight about five minutes later in same location and duration. Roar of low level jets overhead. Went outside to deck. Heard a bloop/whoosh sound.  Then a third sight to the south east of a horizontal row of three lights at low level and fourth light a little further to the south (right) for about 5 seconds duration. Jet roars diminishing into distance with two smaller red lights.  About one year ago my girlfriend described to me a sighting of the three horizontal lights in approximately the same location. She witnessed lights on this sighting also. She just texted me that another woman she works with also saw “4 globes of light.”

A row of three golden lights and a fourth spaced a little further, very loud jets and red glows in distance.  Golden lights about 100 times the size and brightness of a star. First light due south and low on the horizon lasted about 5 seconds. About 5 minutes later another light same location for about 5 seconds.  Stepped outside onto deck. A blipping whoosh sound heard overhead. Southeast direction and low on horizon a horizontal row of three lights and a fourth light a little further to the right. Pursuit jets heard and two red glows seen in distance.  Three similar horizontal lights were seen by a friend and described to me about one year previously. Now I believe her.  NOTE: The above image is a rendering.