Launch
Chang’e 3 was launched at 17:30 UTC on 1 December 2013 (01:30 local time on 2 December) atop a Long March 3B rocket flying from Launch Complex 2 at the Xichang Satellite Launch Centre in the southwestern province of Sichuan.
Homes downrange of the Launch Centre were damaged during liftoff when spent hardware wreckage from the rocket, including one piece the size of a desk, fell on a village in Suining County in neighbouring Hunan province. The county authorities had moved 160,000 people to safety before the liftoff, while more than 20,000 people near the launch site in Sichuan had been moved to a primary school auditorium. The expected wreckage zone for Long March rockets is 50 to 70 kilometres (31 to 43 mi) long and 30 km (19 mi) wide.
Landing
Chang’e 3 entered a 100 km (62 mi)-high circular lunar orbit on 6 December 2013, 9:53 UTC. The orbit was obtained after 361 seconds (6 minutes) of variable thrust engine braking from its single main engine. Later, the spacecraft adopted a 15 km (9.3 mi) × 100 km (62 mi) elliptic orbit. The landing took place one week later, on 14 December. At periapsis, its variable thrusters were again fired in order to reduce its velocity, descending to 100 m (330 ft) above the Moon’s surface. It hovered at this altitude, moving horizontally under its own guidance to avoid obstacles, before slowly descending to 4 m (13 ft) above the ground, at which point its engine was shut down for a free-fall onto the lunar surface. The landing sequence took about 12 minutes to complete.
Topographic data from the Chang’e 1 and 2 orbiters were used to select a landing site for Chang’e 3.

I HAVE RECENTLY LOOKED OVER JUST ONE THE HI-DEFINITION IMAGE FROM THE CHANG’E 3 ROVER AND FOUND SOME VERY INTERESTING THINGS. THIS AREA OF THE MOON REMINDS ME OF A DEAD CORAL REEF LIKE WE WOULD HAVE ON EARTH. I FEEL THERE MUST BE MANY FOSSILS ON THE MOON THAT HAVE BEEN THERE FOR POSSIBLY MILLIONS OF YEARS. OUR EARTH IS OVER 4 BILLION YEARS OLD SO ANYTHING IS POSSIBLE.

THE BELOW IMAGE IS A DUPLICATE IMAGE THAT I HAVE FOUND ON THE SAME HI-DEFINITION IMAGE FROM THE ROVER. THE IMAGE MUST OF BEEN COPIED AND PASTED OVER AN AREA THAT WOULD LEAD TO INCREDIBLE DISCOVERIES. THIS IS HOW THESE THINGS ARE COVERED UP BY THE CHINESE GOVERMENT AND NASA.

ANOTHER STRANGE OBJECT DISCOVERED ON MARS

Mars archaeologists claim they have discovered a UFO flying saucer that crashed on the Martian surface. The researchers back up their extraordinary claim with what they believe to be extraordinary evidence contained in a series of images of the Martian surface showing the alleged crash site viewed from multiple angles.  According to UFO Sightings Daily’s Scott Waring, the crash site, in the Candor Chasma region of Mars, has the coordinates: 6°25’40.89?S 76°53’48.65?W.  Waring described the images as showing what looks like a flying saucer that was buried in the ground when it crashed on Mars.  “This buried structure looks a lot like it landed there on the Mars surface. This is a fantastic discovery of an actual ship that crashed landed.”  In their YouTube channel description, the archaeologists claim that the images show “exposed ruins on Mars caused by a crashed flying saucer.”  The Mars archaeologists suggest that the site of the crash coincides with ancient structural ruins which a fellow Mars researcher, George Marquis, identifies as “an ancient underground production facility and maintenance area for saucers” with “collapsed roofing and jumbled infrastructure” presumably caused by the crash incident.  Marquis speculates further, based on visible features, that the images also reveal what “may originally have been stairs or escalators to the different levels.”  Another YouTube viewer, presumably also a Mars anomaly researcher, adds that “it does look like a crash site, with the embedded round object and trench behind it. But it might be some kind of underground structure or canal.”  The scenario being constructed by Mars anomaly researchers is one in which a flying saucer pilot approaches the entrance to an underground facility but loses control and crashes into the entrance causing a partial damage and collapse of the structure.  The transverse markings on the ground that trail the flying saucer at its final resting position could be marks created as the pilot attempts to arrest or brake the flying saucer to prevent it from crashing into the entrance of the facility.Going by the frequency of discovery of UFO crash sites by Mars anomaly researchers, we would believe that the planet Mars had been the hub of interplanetary flight routes in the past. 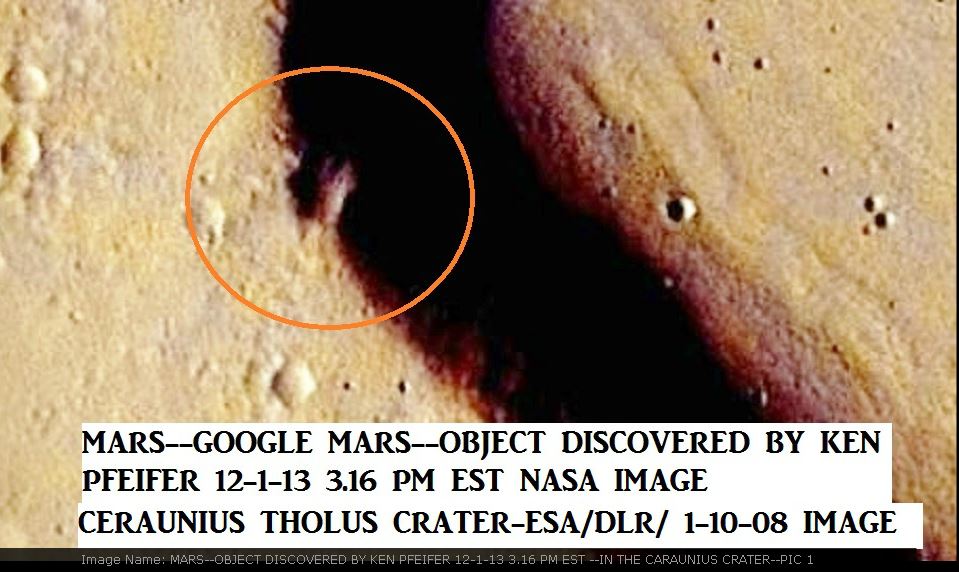 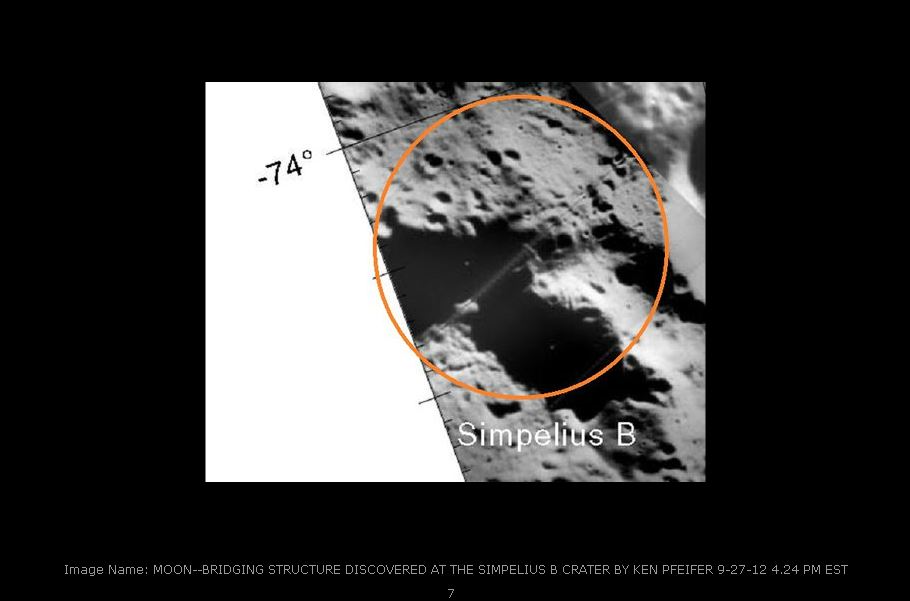 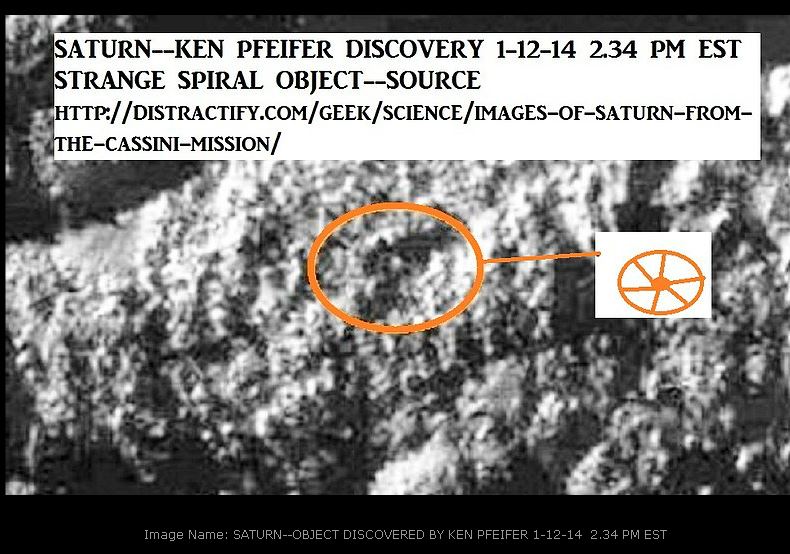 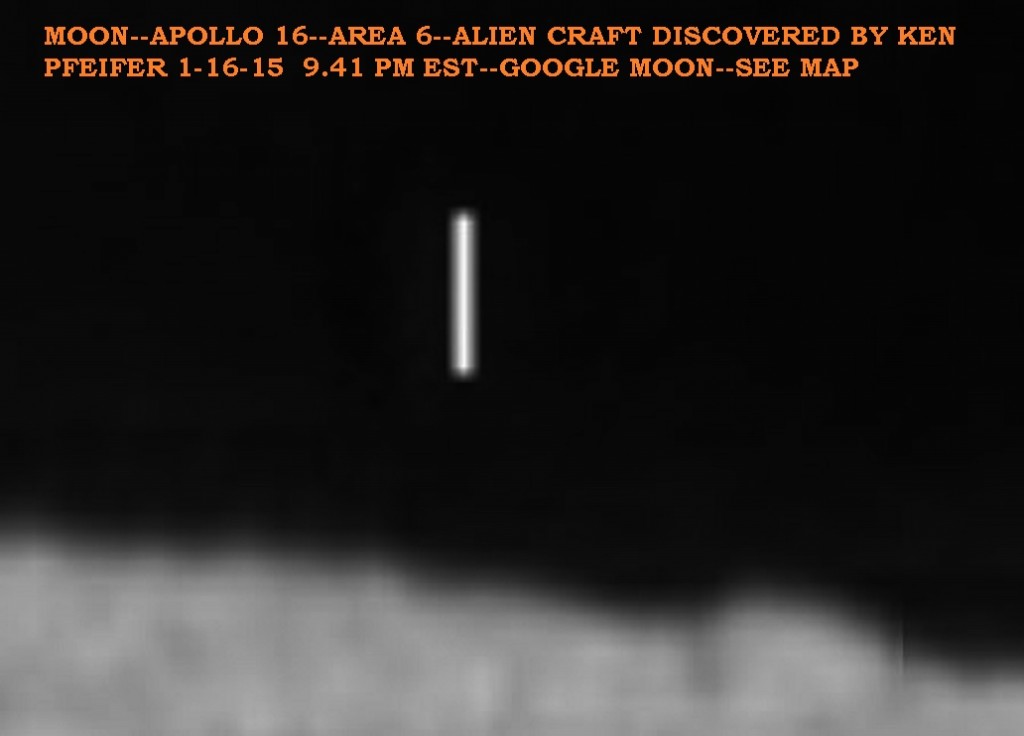 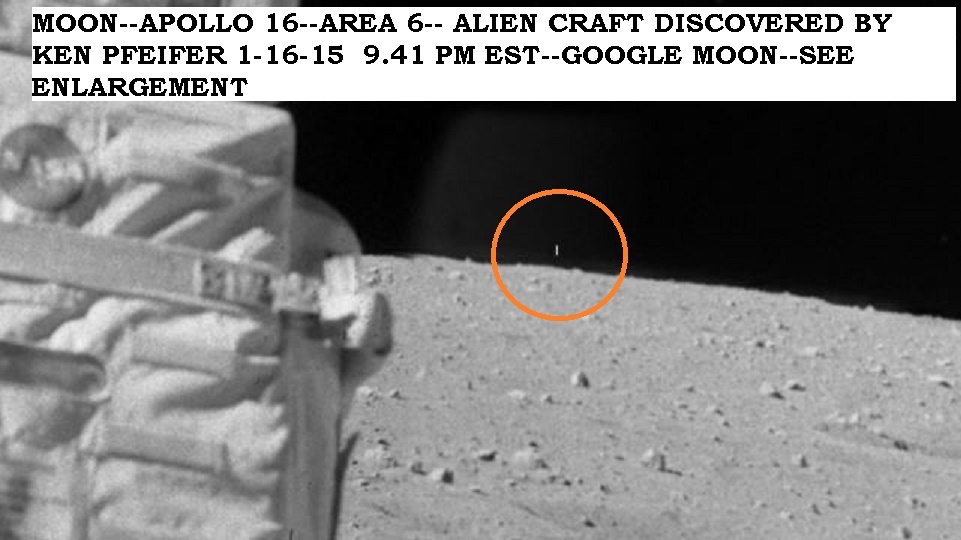 The question whether aliens exists and have contact with planet earth has intrigued the global scientific community. Time and again, certain phenomenon occur which are beyond the explanation of any known scientific logic of planet earth. Moreover, a section of the scientific community firmly believes that there are alien bases on moon.  When we talk of this aspect, it is pertinent to mention Fred Stecking’s famous book, we Discovered Alien Base on the Moon II.  In the book it is mentioned that American astronauts who landed on the moon from Apollo 11 encountered some strange objects, in all probability UFOs (Unidentified Flying Objects) on the moon’s surface. Some accounts even suggested that the astronauts saw buildings, and mining equipment.  The original photographs taken by the astronauts had images of such objects, but NASA tampered with the photographs and by careful use of an airbrush, flying saucers and other UFOs images were removed, and then the photos were released to the public and/or press. Milton Cooper, a Naval Intelligence Officer mentions that not only does the Alien Moon Base exist but the U.S. Naval Intelligence Community refers to the Alien Moon Base as “Luna,” that there is a huge mining operation going on there and that is where the aliens keep their huge mother ships while the trips to Earth are made in smaller “flying saucers”.  In modern times, many unidentified UFOs have been spotted by space missions but NASA has archived those sightings as undermined or classified.  While in orbit mission STS-75 of Space Shuttle Columbia Astronauts witnessed hundreds of objects flying around the shuttle and began to capture the event on a camera capable of seeing past the visible light spectrum, this incident was archived by NASA as Undetermined and Classified. The complete documents, footage and video evidence were never released by Nasa.

Another similar video was taken during mission STS-80 of Space Shuttle Columbia. Two slow moving circular objects; a strange rapidly moving burst of light near the earth’s surface; and a number of fast moving objects in space near the shuttle were captured in the video.  The objects could not be classified as shuttle debris or meteors and once again NASA archived them as Unidentified Flying Objects.  Some theorists even believe that aliens have established contact with earth since ancient civilizations. Some ancient texts even mention sightings of UFO. Livy in his classic text Ab Urbe Condita Libri written in around 3rd century BC mentions about navium speciem de caelo adfulsisse (an appearance of ships shining forth from the sky).  Some even say that the Egyptian pyramids were built by aliens as at that time no such scientific technology was available to the humans to construct with such mathematical precision.  Proponents of this view believe that the pyramids are so accurately aligned with the points of the compass that only aliens could have achieved this all those thousands of years ago.  The angle of the slope of the sides is so precise only aliens could achieve this. The blocks are so heavy and the pyramid so tall only aliens could achieve this. In the period 2500 BC man did not have the tools or knowledge necessary to build the pyramids, so only aliens could have done it. How the aliens built the pyramids is not yet known but they would have employed the use of advanced construction equipment.  Coming back to the existence of alien life on the moon, it is even believed that Neil Armstrong after setting foot on the moon sends a message: “They are here, they are watching us”. Moreover, there is an interesting picture of the moon surface which shows an object resembling a satellite. Another picture shows a structure similar to a pipe or a bridge. Such structure defies simple scientific explanation.  It suggests that extraterrestrials may have inhabited and made structures on the far side of the moon.  Today, as we approach the 50th anniversary of moon landing, several questions still remain unanswered, the biggest of which is why any country hasn’t replicated the American efforts for a manned moon mission?
Even, in the cold war era, when USSR was the dominant rival power bloc as well as a huge competitor of the US in science and technology, they never contemplated to send a fully manned mission to the moon.  With all explanations and theories only one question arises and i.e. “Is it so, that some government agencies across the world are very much aware of the alien base present on the ‘Moon’ but have concealed this fact from the general public?

KEN NOTE:  I have been discovering strange alien craft on the horizon of NASA’s high definition images from the Moon.  Not only are there duplicated images and poor splicing of the moon surface but strange things have been found on the surface.  Either its the surface of the Moon or a stage setting of the Moon here on earth.  Enclosed are a few of my recent findings. 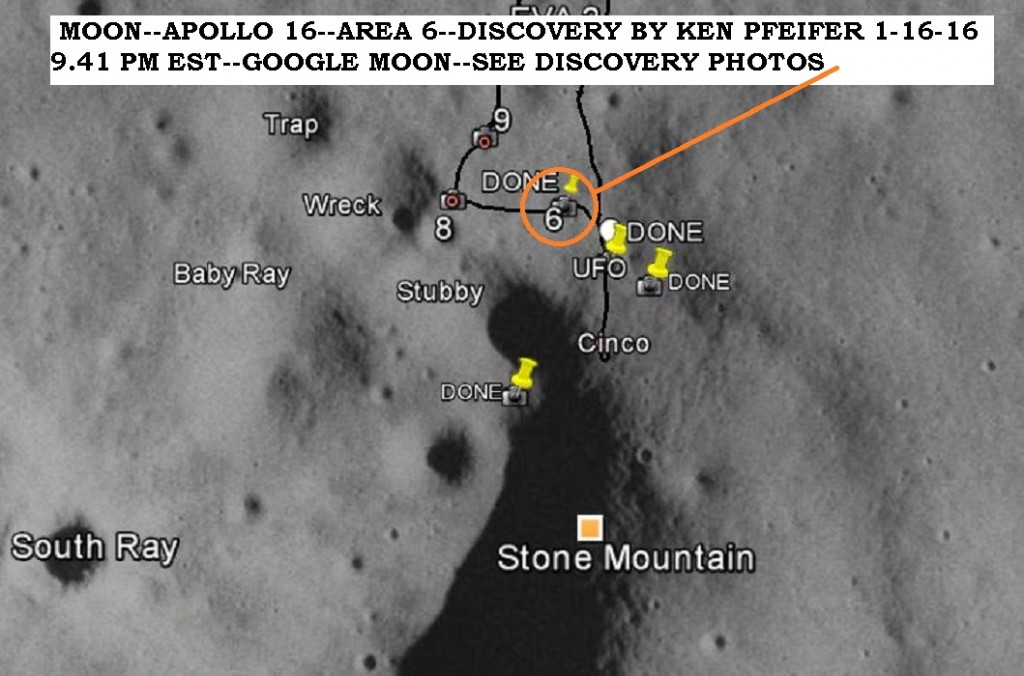 FOR THE ORIGINAL ARTICLE …GO TO 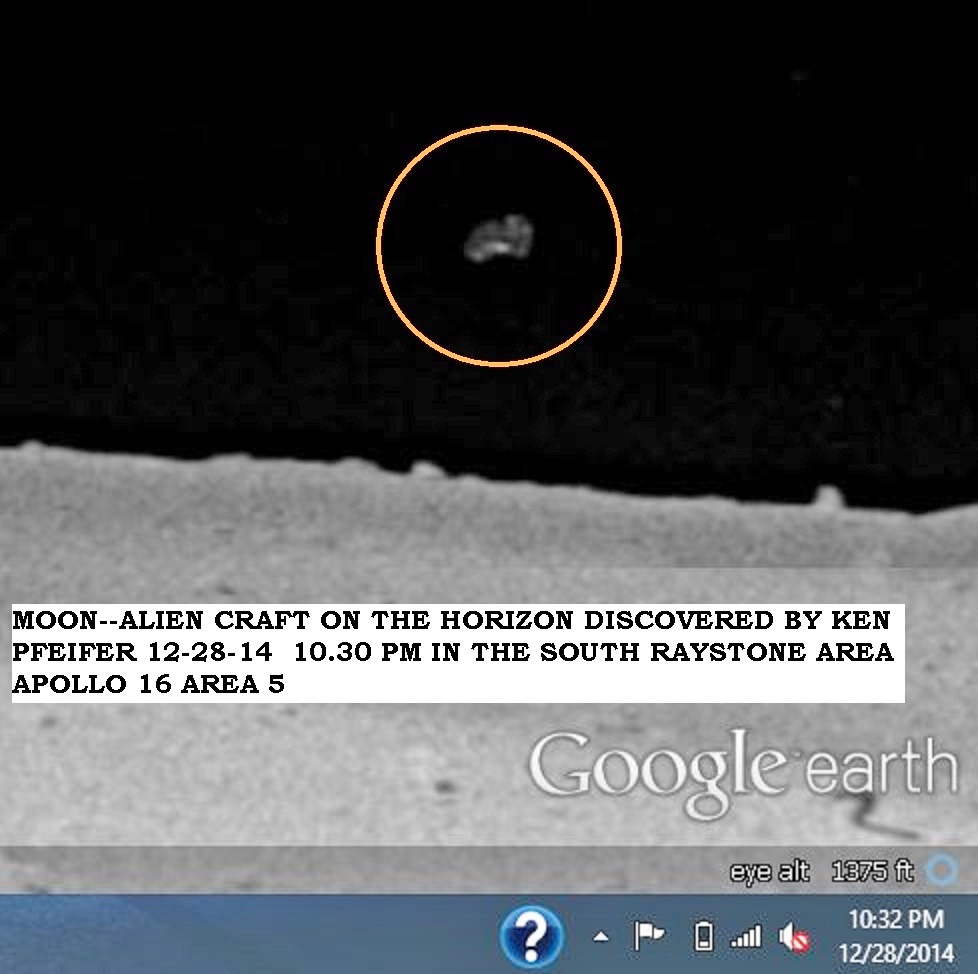 ANOTHER MOON CRAFT DISCOVERY BY KEN PFEIFER ON 12-28-14

After viewing the images on Google Earth Moon, I have discovered an alien craft on the horizon of the Moon.  The photos were taken by the astronauts of Apollo 16 in area 5 of South Raystone mountains.  I have included the area map from Google Earth to get you an idea of where this was found.  This is only one of hundreds I have discovered on the Moon. 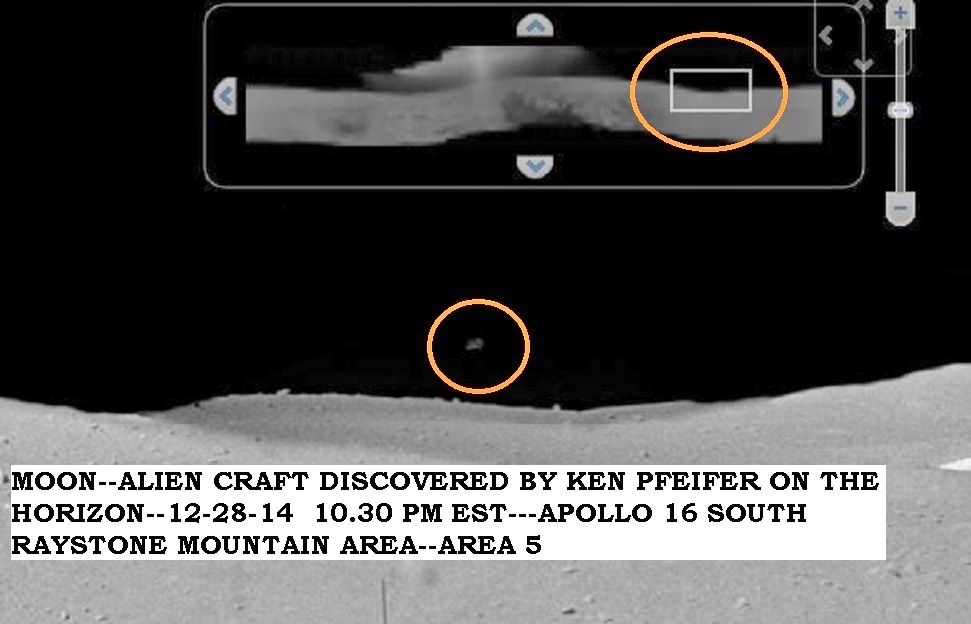 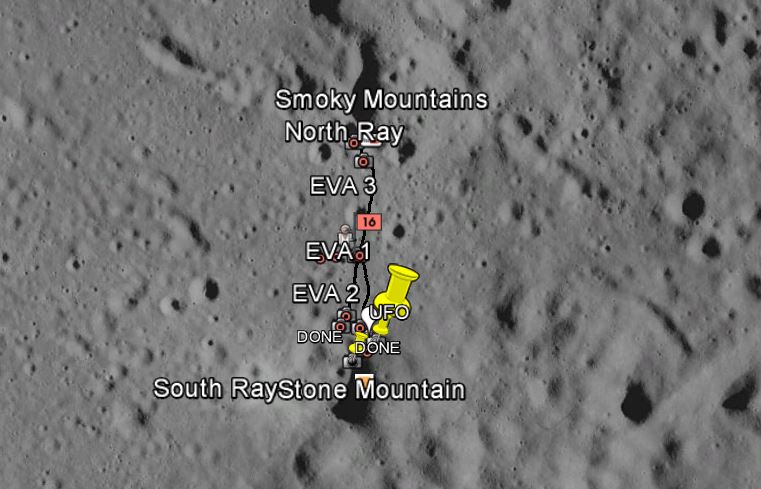 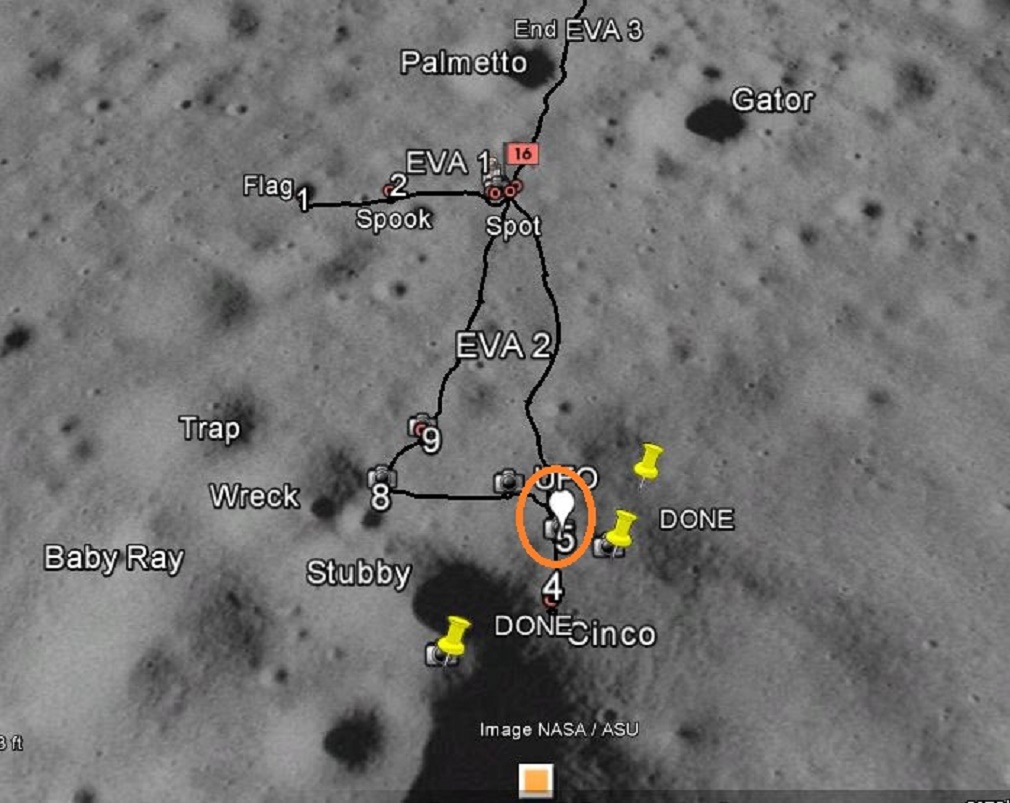