Only weeks earlier on the afternoon of 5th February at around 3 pm, in Kangaskyla Kinnula in Finland, yet another very similar incident would unfold involving a low-altitude UFO near woodland, no less. The account would appear in Flying Saucer Review courtesy of Tapani Kuningas.

The witnesses, P. Aliranta and E J Sneck, were working in the woodlands of the area when they noticed a bizarre metallic object “shaped like two saucers put together” which appeared to be descending in their direction. They would estimate the craft was around 15 feet across and was approximately 50 feet away.

Even more bizarre, as the two woodland workers watched from their location, a small being emerged from the object. They would estimate it was around three feet tall and appeared to “glide” as it moved as if it was on a conveyer belt. They could also see that the entity was dressed in a green garment from its feet to its head – upon which was a helmet with a “circular faceplate”.

Suddenly, the two witnesses realized that the strange being was moving in their direction. They also noticed several more entities looking out of the craft at the scene below. Aliranta would approach the entity, still with his saw in his hand.

Then, the being appeared to rise into the air. Instinctively, Aliranta would reach for its boot. However, as soon as he wrapped his grip around it he felt a burning sensation travel down his arm. He would later recall that it felt like “hot iron” and after regaining his senses, he let go immediately. The strange creature headed straight for the craft, which then took off straight upwards.

Intriguingly, and certainly, a detail shared with our other cases, the witnesses would find indentions on the ground. NOTE: the above image is CGI.

SPECIAL THANKS TO HTTP://WWW.UFOCASEBOOK.COM 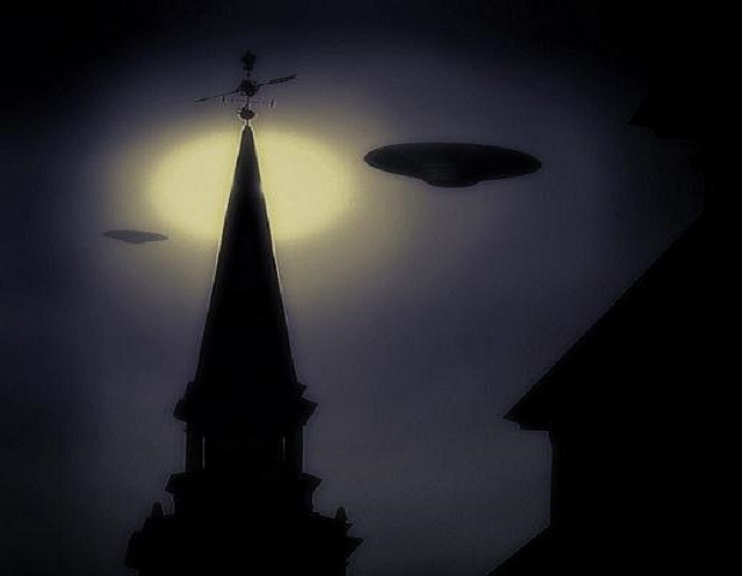 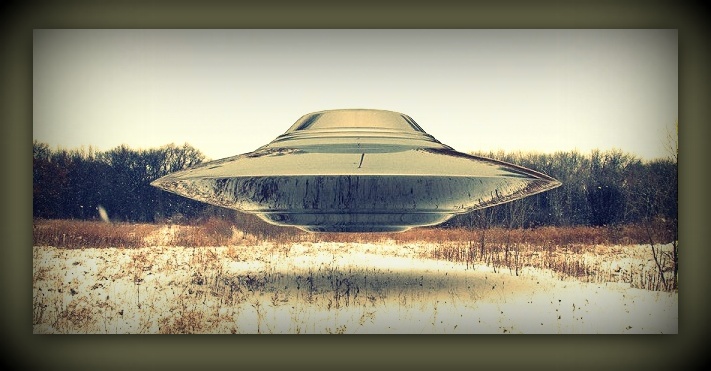 On Friday, February 5, 1971, two young men from Kinnula. Petter Aliranta (21) and Esko Juhani Sneck (18), were working in the woods of the village of Kangaskyla in Kinnula, near the borders of the counties of Middle Finland and Vaasa. At about 3.00 p.m. they were about to end their work, for the cloudy day was slowly turning dark. Aliranta had just turned off his motor saw, when he suddenly noticed a strange metallic-looking object at tree-top level which was descending straight down. It had the shape of two saucers on top of each other and was about 5 metres in diameter. At the bottom of the vehicle there were four thin (5-10 cms.) landing feet, more than 2 metres long. Within a few moments the object descended in a small opening between the trees, about 15 metres away from Aliranta and Sneck. The last-mentioned, however, did not notice what was going on at this time as he was still busy cutting branches off a tree with his motor saw.  During the descent, a round opening appeared in the centre of the underpart of the UFO, and from this, immediately the vehicle had settled firmly on the ground, a strange little being glided down. It actually did glide down those two metres to the snow-covered ground; there was no normal falling movement. After this, the being started approaching Aliranta. Its movements were very stiff and the steps short. The being looked like a space-man, or robot, and was less than 1 metre tall, perhaps 90 cms. The body was covered with a one-piece suit of a green colour. The head had the same cover, and in the middle of it was a sort of lens facing forwards. The hands were round at the tips and no fingers could be seen. The “boots'” at the feet were a uniform part of the dress, and green as well.  The humanoid seemed to move in a strange way on top of the snow surface; it did not go down into the deep snow as one would have expected. As this entity was slowly but steadily advancing towards Aliranta, he started his motor saw and began to approach the strange walker with motor saw in hand.

At this point, Esko Sneck also became aware of the strange happenings; the turning on of the motor saw had made him turn around to see what Aliranta was up to.  “The little green man” and Aliranta were approaching each other, the distance between them now less than 10 metres. Suddenly the being turned around and started eventually to go back towards the saucer. This made Aliranta braver, and he hurried to catch the humanoid. Within the saucer, other entities were now visible; there were three “windows” on the topside of the vehicle (about 1 metre wide) and through one on the right side three moving forms were visible, humanlike, although no features or details could be seen. As Petter Aliranta was about to get hold of the humanoid, when about 3 metres from the saucer, it rose into the air in a strange way, floating towards the opening from which it had come. The humanoid having risen to more than 1 metre above the ground, Aliranta reached out quickly and grabbed hold of the heel of the right “boot” with his bare right hand. However, he had lo let go of the foot right away as it burned like a hot iron (the wounds caused by the burning on the thumb, forefinger and inside of the hand were still clearly visible two months later). At the same time, Aliranta automatically took a couple of steps backwards, so the entity was able lo glide back into the craft undisturbed.  The moment the humanoid had got into the saucer, the latter started to give a slight humming or buzzing sound, and it slowly started to ascend from the ground. Aliranta felt a weak gust of air at this moment, but no smoke or smell could be detected, nor any light phenomenon (there were no lights visible on or in the vehicle during the incident). As the saucer rose upwards the round opening at the bottom closed (but the landing feet kept their position) and within some fifteen seconds the whole object had disappeared into the sky.

According to the eye-witnesses, the visit of this strange craft lasted at least three minutes. After the saucer had disappeared the men could not talk, for they were too amazed by the whole incident. They felt stiff all over and had some difficulty in moving, especially Petter Aliranta. It took them close on one hour before they were able to walk away from the woods. Before they left they had a closer look at the markings left in the snow, evidence of this incredible happening.  At the end of each landing foot there had been a round plate. These plates had penetrated the full depth of the snow cover (then about 40 cms.), leaving four round prints (about 35 cms. across) in an even square with a side of about 2 metres. Within this square the snow had melted some 5-10 cms. on the surface. The footsteps left by the humanoid were also clearly visible.  NOTE: The above image is a rendering.